As I have documented once or twice, my Dad is the most frugal guy I know. For crying out loud he puts a brick in his toilet tank to save water, he slices the mold off a block of cheese and calls it “good as new”, and he waters house plants with a five gallon bucket of water he fills with runoff water from his showers. Ewww. 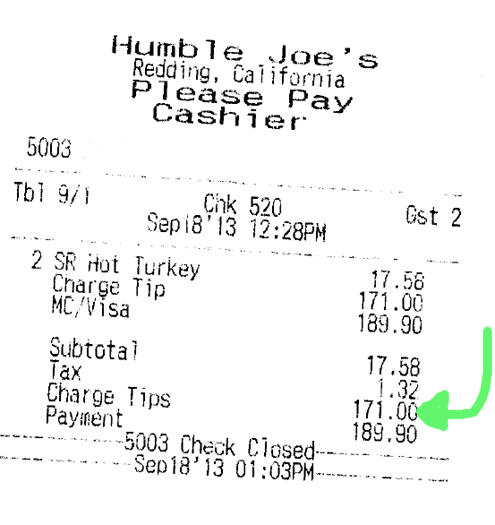 So imagine his surprise when after dining with my Mom at a local eatery (they both ordered hot turkey sandwiches and water) he looked at his credit card receipt and saw that the total was $189 and some change.

The worst part? It was the next day when he noticed the error.

After he changed his underwear and had his heart rate return to a normal rate, he got in his car and returned to the scene of the crime.

Side-note: My initial thought when I saw the receipt was the waitress was just pissed that he only left a $1.70 tip on a $17.58 bill and decided to exact some revenge.

So my Dad walks into the establishment, the jukebox goes silent, everyone turns to see what the commotion is all about. Order is quickly restored when it becomes apparent what the problem was.

Turns out the restaurant is having some internal problems with their credit card processor and it is printing out some very funky numbers. The weird part was that the staff was very nonchalant about the whole deal and said that the correct amount was indeed charged to the credit card. My Dad, not completely satisfied, asked to use their phone to verify this with his credit card company. Sure enough, he was only charged for the price of the meal, plus tax and tip.

Ask the Reader: Has something like this ever happened to you? If so, what was the outcome.

lyle @ the Joy of Simple

Wow…cool tale Kyle. At least it all ended well for your dad 🙂 That would have been SOME tip and probably would have made a FOX news broadcast!

Thanks for the smile and take care. All the best.

This has not happened to me but I did it once…I asked if they wanted to add a tip to the credit card & they told me yes $15.00 but I hit one to many 0’s when it printed out before I even handed it for a signature I went WHOA hold on..we all got a good laugh about it but imagine if they had wrote the tip in & when it was adjusted it happened…scary

This hasn’t happened to me but I’d be pissed about that restaurant. If I worked there, I’d try to be more reassuring to the customers!

I would totally panic if this happened to me! I’m glad your Dad wasn’t charged $171 for a tip.

LOL, your dad must me mighty proud of his frugal son, I would imagine. 🙂 What a great story! Thanks for sharing, Kyle.