Sam’s Club Vs Costco: Which Warehouse Club Will Save You More?

There’s no arguing the fact that warehouse clubs can help you save money on certain items. But your savings comes at a price, namely an annual membership fee that allows you in the door. Costco charges $60 a year, while Walmart owned Sam’s Club charges $15 less at $45 annually.

So this begs the question, which club will save you more money on the items on your shopping list? To help answer this question, below is a handy price breakdown of nine popular items at both places so you can decide which club will help you save the most. 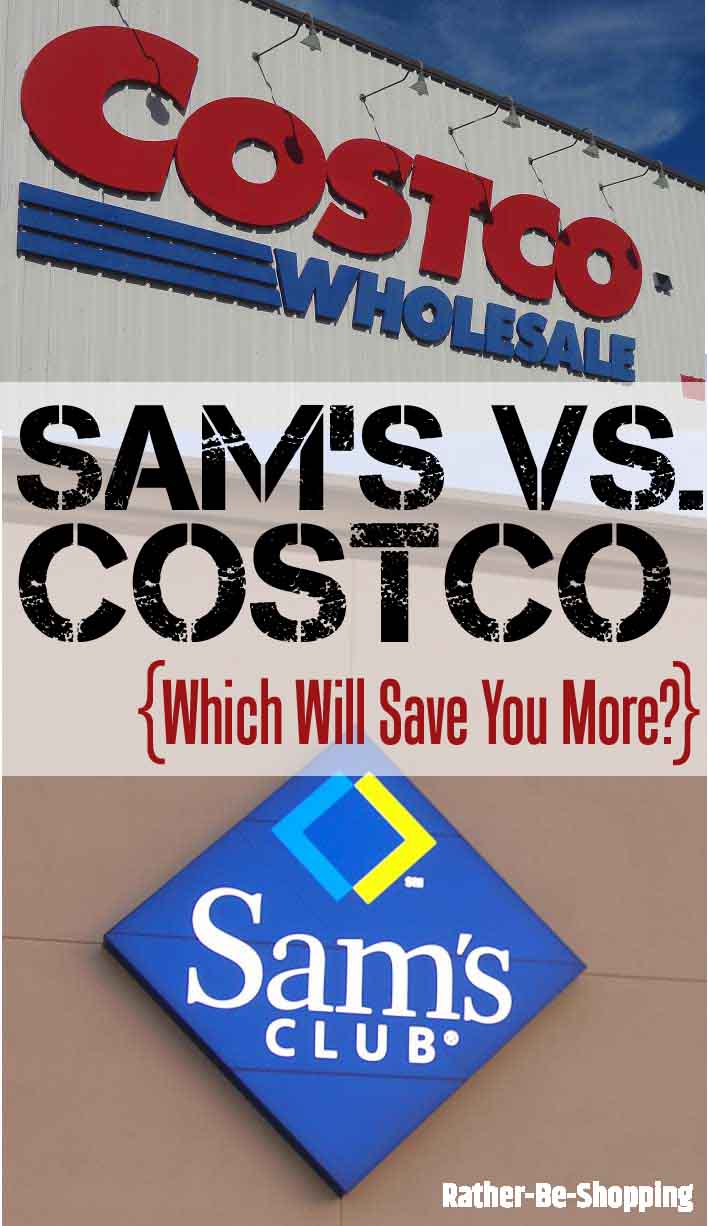 When it comes to name-brand HDTV’s, Sam’s Club is typically 10-20% cheaper than Costco. Examples of this savings include the Samsung 40” Smart LCD TV, you’ll find it for $280 at Sam’s and the same exact model will cost you $349.99 at Costco.

You’ll also find similar savings on more expensive models like the Vizio 58” 4K; $828 at Sam’s and $999.99 at Costco. The bottom-line is that when comparing prices, always check out the prices at Sam’s. I was actually unable to find any HDTV cheaper at Costco compared to Sam’s Club.

When it comes to name brand diapers, you’ll save more at Costco.

Specifically, Huggies “Little Movers, Size 3” comes out to $0.21 per diaper at Costco, while you’ll pay $0.24 each for a similar sized box at Sam’s. Three cents less per diaper might not seem like much, but it’s significant savings over the course of an entire year.

You’ll clearly save more money on toilet paper with a Sam’s Club membership. For example, at Sam’s you can get a 30-ct package of Quilted Northern Ultra Plush for $0.66 per roll, while you’ll pay $0.83 per roll for the same product at Costco.

Even when comparing the store brands of both warehouse clubs, Sam’s wins fairly easily with a per roll cost of $0.40. The Costco Kirkland brand is only slightly cheaper than the premium Quilted Northern brand at $0.77 per roll.

Both warehouse clubs carry their own line of frozen chicken breasts and the Sam’s Club brand, Daily Chef, easily under-cuts the Kirkland brand in price.

If you’re like my family, and stock up on frozen chicken breasts and store them in the freezer, Sam’s will save you significant money over the course of a year.

When comparing the generic brand of facial tissues at both stores, Sam’s Club came in at over 50% cheaper per tissue. The Sam’s brand, Member’s Mark, sells in a package of 12 separate boxes (169-ct each) and retails for $11.98.

Costco Kirkland, on the other hand, also sells a package of 12 boxes (only 90-ct each), but sells for a whopping $18.99. Both products are 2-ply tissues, but one is a lot more expensive than the other. In this case, shop at Sam’s and save big on tissues.

Both clubs sell their store-branded shredded cheese in five pound bags. Costco Kirkland sells for $15.79 per bag, while Sam’s Member’s Mark sells for 6% less at $14.57.

Not a huge price difference, but if you’re buying for a large family, and go through a bag per month, that’s a savings of close to $15 over the course of a year.

So by purchasing Lysol wipes from Costco, you’re essentially getting 50% more wipes for an extra $2.

While the price of Advil pain reliever is very similar at both warehouse clubs, Sam’s wins this challenge based on their low-price of the popular Aleve Liquid Gels.

Also, staying with the liquid-gel theme, Sam’s sells Advil Liqui-Gel for 15% less than Costco too.

The current gold-standard, in terms of wearable technology, is the Fitbit Charge HR Activity Tracker Bundle and it’s significantly cheaper at Costco. Specifically, you can get it for $138.69, compared to $149.88 at Sam’s Club.

The low Costco price is actually the cheapest I could currently find anywhere; worth keeping in mind as we head towards Christmas.

Interestingly, Sam’s Club won the majority of my pricing challenges making their $45 membership fee a smart buy for many shoppers.

In most cases, the same can also be said for a Costco membership as it will also easily pay for itself over the course of a year, especially if you’re accustomed to buying in bulk.

Ask the Reader: If you’re deciding which warehouse club to join, do any of the above products sway your thinking one way or another?

keep in mind that not everyone likes Huggies—they actually don’t have good reviews compared to Luvs or Pampers. You may not have BJ’s where you live, but in the Northeast we have BJ’s and Costco. BJ’s carries Luvs that with their coupons are better deals than Costco’s.

Costco is better priced for expensive items cheap, like pine nuts, coconut oil, organic/halal beef and chicken, nuts, imported french parchment paper, etc. If you’re not into that stuff, they’re not the place for you. I do both Bj’s and Costco, and I can justify the Costco membership because I got the executive and share it (with family members) so the 2% back each year makes my membership nearly free. But like Sam’s, BJ’s is better priced on most “regular-joe” food items.

We’ve always been Costco loyalists. I think part of it is that you get used to it and it’s hard to even consider the other option. We may have to give Sam’s a look-see and determine for ourselves what’s best. We do more ‘grocery’ type items than anything else, which I didn’t see a lot of on your list, so it’d be interesting to see how our personal needs stack up.

I don’t think Sam’s gives you cash back on your buys. Since your annual discount-rewards check at Costco can vary from zero (if you’re a cash shopper) to 4% (for Executive members making gas purchases using the Costco-linked Visa), I think for absolute value it’s Costco or a tie. If you value good pay and decent worker treatment as much as savings, go with Costco.

Actually they do give u the option for cash back
And they always have some of the best workers and cashiers.

More like overpaid for the type of work it is at Costco.

On TVs they may seem like the same, but the difference with the connection etc. KS cheese is a premium cheese not just cheap cheese. If you want cheap product cheap go for Sams/Walmart. For quality items cheaper, Costco.

Id have to say that when it comes to healthier choices, Costco wins hands down. They have a much better selection for this demographic.
Also, did you know the origianl founder and CEO of Cotsco had one of the lowest salaries; $350k. Not to mention his contract was leas than half a page long. Also, during his time as CEO, Cotsco employees were paid 40%-60% more than there competitors. Here in Texas, thats Sam’s.
One last tidbit. Depending on what side of town Sams is for you, employees can be rude . Cotsco, if you’ve noticed. Are ususally happy no matter what.

I agree that Sam’s might save you more, but quality is a big factor for me. Costco’s brand Kirkland is tested and compared to the highest industry standard. For example, their laundry detergent is compared to Tide since Tide is the highest industry’s standard. This says a lot. Walmart and Sam’s are notorious for being cheap quality. The Great Value brand is an example of this, which I buy on many occasions at Walmart. So if you don’t care about quality, Sam’s is your choice. But if you like quality and value, then Costco is the better choice. Also sometimes the in store prices at Costco are better than online, depending on location. I prefer Costco.

Case in point Great Value Honey was found to have no pollen. How do you get honey without pollen.

This was a good read! It is helpful for deciding which membership to go with!

very Good read. I have been debating on renewing my sam’s club membership, and now after all this even though sams club is cheaper quality is what i am looking for. Costco it is!

You need BOTH Sam’s & Costco.