Let’s admit it, secret menus are really fun and often VERY tasty. The only thing more fun than researching Chipotle’s secret menu was placing an order for something that wasn’t on their regular menu and feeling like a total bad ass in the process. Items that are kinda wacky, highly customizable, and definitely delicious. Here’s how the secret menu at Chipotle currently breaks down. 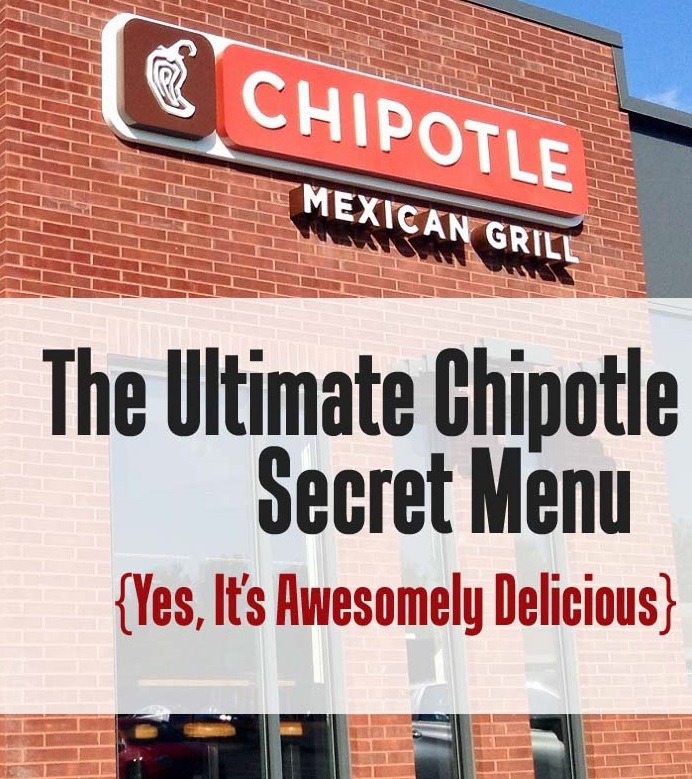 This super burrito, known as a Quesarito, is the thing of legend.

It’s basically everything that comes in a standard Chipotle burrito wrapped inside a cheese quesadilla.

It comes in at about 1,500 calories and can easily feed a family of 4.

If you love the Mexican cheese mix that Chipotle uses, you’re going to be a HUGE fan of this sucker.

While not every Chipotle employee knows how to make the Quesarito, they’ll typically make it for you if you just tell them what it is.

Amazingly, the standard menu at Chipotle does not include the classic quesadilla.

But just ask for it and they’ll make you one without missing a beat.

If you’re not familiar with the delicious quesadilla, it’s simply two crispy flour tortillas with melted cheese in the middle.

See Also: Chipotle Menu Hacks: How to Score a 86% Bigger Burrito for Free

The name of this one is really stupid.

When you hear “Burritodilla” you think of something that looks a burrito.

In actuality, the Burritodilla is a quesadilla with more toppings in it than just cheese.

Ask for steak, chicken, or carnitas, and any other toppings you want, and they’ll throw it into the cheese quesadilla before they grill it.

Sounds delicious and like something straight outta Napoleon Dynamite.

Politely order a double-wrapped burrito and they’ll wrap your burrito in 2 flour tortillas instead of one.

The key here is to ask if they can warm up both of the tortillas.

The result is a burrito that delivers the warm and chewy inner goodness that a flour tortilla provides.

Also, the extra tortilla keeps the thing from falling a part on you.

Heck, you can even use it to deconstruct your burrito and make two separate burritos.

One for now, one for later, remember these things are huge.

The best part? They typically won’t charge you for the 2nd tortilla.

When I was a kid I had a love affair with the Nachos Supreme at Taco Bell.

So when I heard you can ask for nachos at Chiptole, I was very excited to say the least.

Ask for it and they’ll serve you a bowl anchored by their yummy tortilla chips (instead of rice) topped with cheese, beans, choice of meat, vegetables, sour cream, guac, salsa and more.

I tried it on a recent trip to Chipotle and it’s now my favorite thing to order.

Instead of the famous burrito bowl, many Chipotle locations will serve you a taco salad with the bowl being a crispy flour tortilla that you eat as well.

While I have yet to see a taco salad at the Chipotle that I frequent, they are said to still exist.

While you won’t see cilantro mentioned anywhere on their menu, all you gotta do is ask for it and BAM, it’s added to your burrito or burrito bowl for free.

The guy in front of me at Chipotle was ordering a burrito bowl and politely asked for “extra cheese”.

The answer is an unequivocal YES!

This goes way beyond cheese too.

You can pretty much ask for extra anything other than meat and guacamole.

Get in the habit of doing this and you’ll consistently end up with more food for free.

If you’re not super hungry, you can order a single taco instead of the usual 3-pack.

Good to know, especially if you’re only at Chipotle to grab a beer or margarita with friends.

This was a tip from my brother-in-law who told me they always have white rice without cilantro hidden in the back.

You just gotta ask for it.

Ask the Reader: What’s your favorite thing to order at Chipotle Mexican Grill? Have you ever tried something off their secret menu?

Have fun and eat healthy my friends.

Of course you can ask for extra cheese… yah idiot.