Costco is known for offering major savings on all its products. Whether you are looking to stock up on your favorite cereal or save big on electronics, Costco has it all, including a great food court. Costco’s Food Court offers customers the opportunity to CHEAPLY satisfy their hunger before or after their shopping. Plus, even non-Costco members can typically enjoy food court items. From ordering a slice of pizza to a hot dog, smoothies, and more, there are a variety of cheap items you can order. Here’s exactly how the Costco Food Court menu breaks down, including current prices, selection, and even the food items that have gone off the menu in recent years. 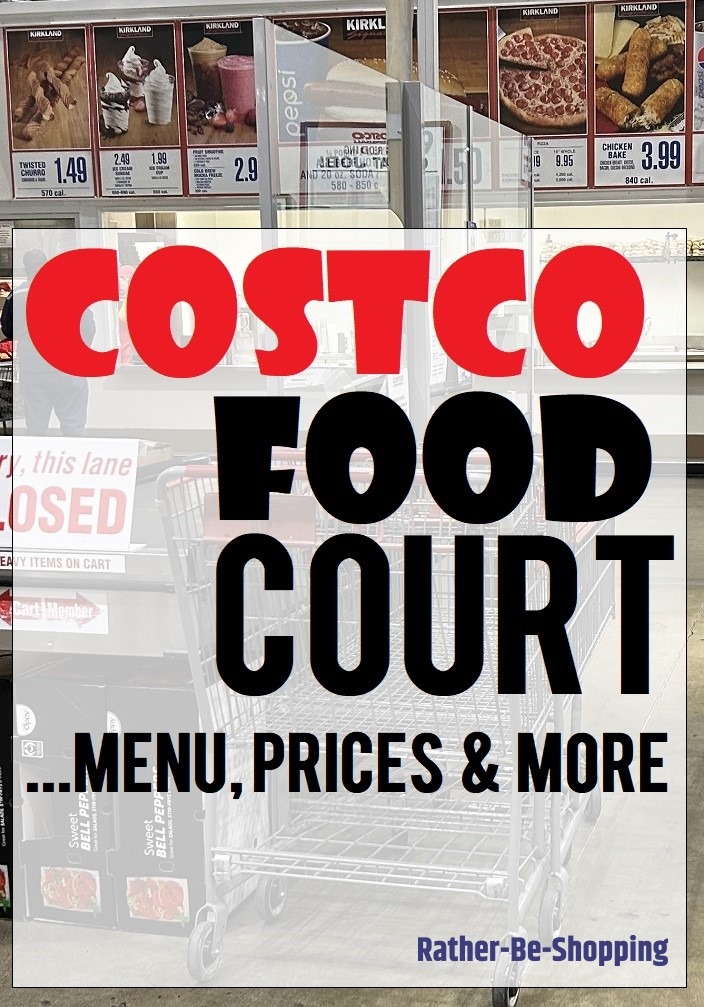 What Are the Items on the Costco Food Court Menu and Prices?

The Costco food court menu consists of a variety of delicious items but unfortunately prices are rising just like everything else at the grocery store.

Below are all the items currently on the Costco Food Court menu, and their corresponding prices:

Keep in mind, prices may vary depending on the Costco Food Court you go to.

But, by and large, expect significant savings compared to other fast food restaurants and pizza joints.

What Toppings Can I Get on My Pizza?

The combination pizza in the Costco Food Court was a pandemic casualty and went away in 2020.

You can now only get a cheese or pepperoni pizza at the food court (by the slice or a whole pie).

They beat out the likes of California Pizza Kitchen and Jet’s Pizza.

Plus, the thing is as big as a man hole cover.

What Food Court Items Went Away in Recent Years?

All good things must come to end, and this definitely is the case with the Costco Food Court.

Whether it be the pandemic, or a lack of demand, the following items no longer exist:

Can Non-Costco Members Use the Food Court?

If you live near a Costco that has a Food Court with an outside ordering window, anyone can order from it.

Awhile back I was at a Costco in Phoenix, AZ that had this exact setup.

The food court window was in a foyer before you walked into the actual Costco, and anyone could order chow from it.

Also, my high-school aged daughter often hits our local Costco Food Court on her lunch break WITHOUT a membership card.

She told me the card checker at the door always lets her, and her friends, enter the warehouse and head directly to the food court.

See Also: 8 Things You Can Do at Costco Without an Annual Membership

Depending on the country you’re in will influence the items offered at the Costco food court.

For instance, the Costco locations in France serve a ham and cheese croissant on their menu while Costco food courts in South Korea serve chicken teriyaki on their menu.

Here are some other interesting Food Court variations by country:

Canada: You’ll find something called poutine. Poutine originated in the province of Quebec, and is made with french fries and cheese curds topped with a light brown gravy. Dang, anything with gravy on top has to be pretty darn good.

Japan: Look for bulgogi bake. It’s a calzone shaped thing stuffed with beef and other goodies.

Australia: Give the meat pie a taste.

Hawaii: Give the Saimin a try. Apparently Saimin is a local favorite similar to noodle soup. Or exactly like noodle soup.

Note: I’m starting to get really hungry as I write this article

Are Some Food Court Items Available in the Warehouse?

Notably, the frozen Kirkland Chicken Bakes are the exact same ones that you’ll find in the Food Court.

Also, while the name “Chicken Bake” sounds pretty darn healthy it turns out to be quite the opposite.

With a whooping 840 calories and 25 grams of fat, it’s delicious because it will probably shorten your life by several months.

In case you’re not familiar, the Chicken Bake is a hot chicken pastry stuffed with chicken, green onion, and a blend of mozzarella, provolone, and parmesan cheese.

Does Costco Lose Money on the “Hot Dog Meal Deal”?

According to Business Insider, “Costco dishes out more than 100 million hot dogs at its food courts, which is more than four times what Major League Baseball sold at its ballparks in 2011.”

The good news for shoppers is that Costco is adamant that they’ll NOT be raising that $1.50 price, which started way back in 1985.

While the hot dog meal deal may very well be a loss leader, Costco keeps their costs as low as possible by producing the dogs themselves at a central California facility.

See Also: Does Costco Deliver Groceries? Here’s How It Works

Can I Call In My Order Ahead of Time?

As of 2020, you can NO LONGER skip the food court line at Costco by calling ahead and placing an order, even if it’s a large order like 5 or more pizzas.

Therefore, if you need a large order for a special event, be sure to save enough time to potentially wait in line and order your food.

This was such a bummer when that ability to call in orders went away, it was SO convenient to call in a large pizza order for birthday and school parties.

What are Costco’s Food Court Hours?

While specific store hours may vary by location and store, here are the general Costco food courts hours you can expect:

Ask the Reader: What’s your favorite Costco Food Court menu item? Any items in particular that you wish they’d bring back?