Does Walmart Take Apple Pay? (Plus a Clever Workaround to Make It Happen)

If you consider yourself an Apple fanboy (or girl), you’re probably a HUGE fan of Apple Pay. Nothing more convenient then just pulling out your iPhone and paying instantly at checkout…heck, you don’t even need to bring your wallet to the vast majority of stores these days. But does Walmart take Apple Pay? Or are you stuck using the Walmart Pay app or a regular ol’ credit card? Let’s break it all down.

Walmart does not currently accept Apple Pay as a form of payment, either in-store or online.

But…keep reading as I have a clever workaround that’ll let you use Apple Pay when shopping in-store at Walmart.

Will Walmart Accept Apple Pay in the Future?

The reasoning is because it would hurt the bottom line of Walmart’s income statement if they let shoppers use Apple Pay.

According to Business Insider, the reason Walmart won’t ever accept Apple Pay is because of a contractual obligation to Merchant Customer Exchange (MCX).

Walmart uses MCX’s mobile payment system via Walmart Pay and thus avoids the 2% credit card fee that they would be hit with if they started accepting Apple Pay.

So for Walmart, it’s more about the financial impact rather than appealing to consumers. No surprise there.

Is the “Walmart Pay” App Worth the Effort?

If you shop regularly at Walmart, the Walmart Pay app is worth downloading and a decent alternative to Apple Pay.

Essentially you link your form of payment to the app and then use your phone to complete your purchase in-store.

All you have to do is scan the QR code at checkout and not only will you pay quickly, but your eReceipt will be saved in case you ever need to make a return.

What Payment Methods Does Walmart Accept?

The good news is Walmart DOES accept the following forms of payment:

– Walmart Pay app – Add your credit, debit, or gift card to the app and you can use Tap Services at check out.

See Also: What About Target? Can I Use Apple Pay?

Clever Workaround: Use the Ibotta App to Pay with Apple Pay 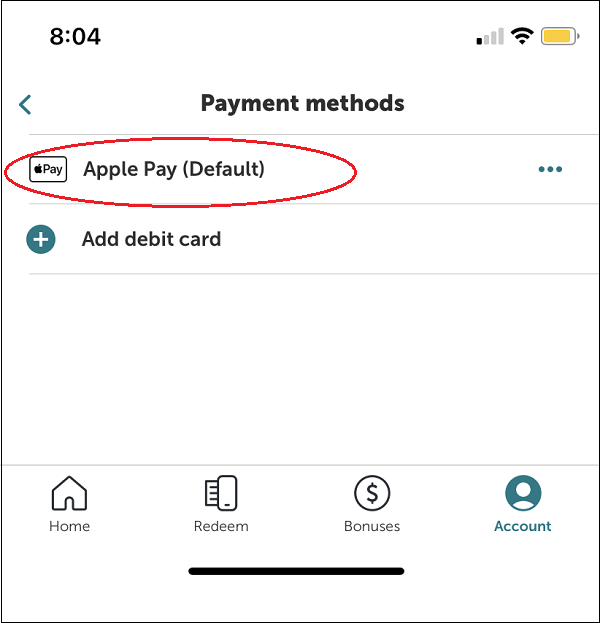 If you’ve been around here long enough you know that I’m a HUGE fan of the free Ibotta app.

Ibotta basically pays you money to buy stuff from the grocery store that you’d be buying anyways in the form of cashback rebates.

Well, it turns out that Apple Pay works seamlessly with Ibotta and allows you to set it as the app’s default payment method for when your shopping at Walmart.

You then actually use the Ibotta app to make your purchase at Walmart once you have Apple Pay set as the default.

To see exactly how this clever Walmart hack works, here’s a great YouTube video that walks you through it.

Essentially, at check out, you open the app, enter your purchase total on the Walmart section of the Ibotta app, pay using Apple Pay, then show the barcode for the cashier to scan.

You’re basically buying an “instant” Walmart gift card using Apple Pay….plus Ibotta is giving you cashback in addition to whatever your credit card gives you.

The secret sauce is to link your Apple Card to Apple Pay, use Ibotta to pay, and get 3-4% back at Walmart for doing virtually nothing.

See Also: Insider Hacks for Using the Ibotta App to Save Money on Groceries

So Where Can I Use Apple Pay?

Excluding Walmart, Apple Pay is accepted at a bunch of popular retailers, restaurants, and coffee houses.

Here are a bunch of the more popular spots:

Ask the Reader: Do you know of any other clever ways to use Apple Pay when shopping at Walmart? Let me know in the comments.

As of May 2022, Kroger still does not take Apple Pay

So which will save me more in the long run? The Walmart pay app or the ibotta app?

Cause Wal-Mart just cant afford that 2% and make it easier for their customers to pay for stuff. Ignorant!

Actually, what Business Insider says isn’t true. First of all, Walmart isn’t saving that 2%. The fee has nothing to do with contactless payments, it’s just for using the card networks, so as long as they still accept credit and debit cards -which they do both in-store via chip or magstripe and in the walmart pay app- they’re still paying that 2% fee to the card networks. Second, the contractual obligations with the Merchant Customer Exchange no longer exist. Proof of that is that other merchants that had the same obligation such as CVS, Dick Sporting Goods, 7-eleven, Best Buy or the Rite Aid pharmacies have already turned on contactless and accept Apple Pay.

So Walmart not accepting Apple Pay at this point is only because they want to obtain more information when customers pay, nothing else.

The Home Depot’s near me doNOT accept Apple Pay.