The stars all seemed aligned when I recently pulled the minivan into the Vacaville Outlets as we had a couple extra hours to do a little shopping before we finished our drive to visit friends in the San Francisco bay area. The stars quickly seemed to be exploding as the parking lot was TOTALLY packed. I almost said “screw this” as I drove the minivan around and around looking for an empty stall with 3 kids in the back who were getting “anxious” to get out. 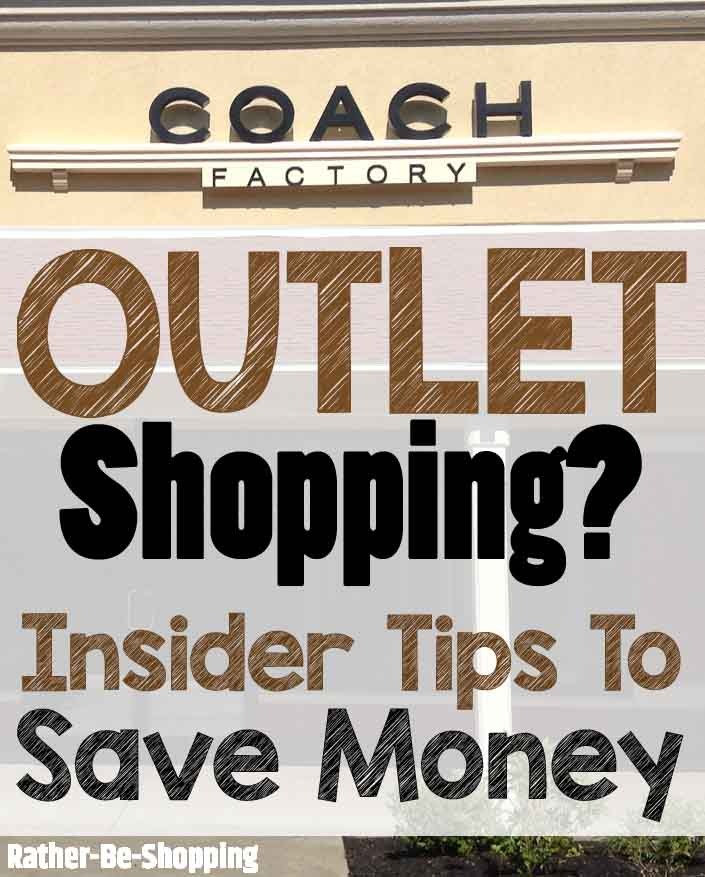 In case you were wondering, I looked up the word “anxious” in the smart-ass dictionary and it means, “driving Mom and Dad crazy and making them want to saddle up to the bar at Chili’s.” But anyways, here are the ways to maximize your savings when shopping at an outlet or factory location.

The biggest takeaway from my family trip to the outlets was that you have to be really careful about the pricing.

Some have the exact same merchandise, at what appears to be the exact same price, which is really odd to me. What the heck is the point? Shoppers are eventually going to catch on (if they haven’t already).

The actual percent of merchandise found in most outlet locations, that are either irregulars or factory seconds, is around 1% to 5%. Everything else is either the same stuff found in regular retail locations, or cheap stuff made specifically for the outlet or factory store.

If you’re going to have an outlet location, at the very least take last season’s merchandise, poke some holes in it, mark the tag with a Sharpie, and lower the price by 20%.

Here are the 3 main types of “Outlet” stores:

By knowing the differences between these 3 types of stores, you can shop knowing exactly what potential deals you’ll find within.

Once we finally found a spot to park, we were very impressed with the Labor Day sales many outlets had going on.

In particular, American Eagle Outfitters had a 50% off the entire store sale going on, even on clearance items. My wife bought some blouses that were regularly $45 for like $12 since they were on the clearance rack and she got an additional 50% off.

I had no idea that AEO even had outlet stores since I always see their overstocks at our local TJ Maxx. But sure enough they do, and the 50% off dealio was pretty awesome.

I asked the gal when we were checking out if they do this often and she said “No, only twice a year can you buy this trendy, Cambodian made, crappy clothing for 50% off our ridiculously expensive regular prices.”

Other holiday weekend to check out include Memorial Day, 4th of July, Thanksgiving, and the 5 days between Christmas and New Year’s.

Gotta say that if you have a weakness for good deals, most of which you clearly don’t need, you might want to stay away from outlets like I stay away from the center aisles at Costco. The deals tend to call out my name and pull me in with their force field.

This was especially true when I was standing in the long checkout line at the Nike Outlet where they have all these cool socks, clearance shoes, and other awesome sports thingies.

It was all I could do to keep my blinders on and stay focused on why I came into the store which was to buy my son some new duds for school.

Luckily, I was able to “Just Do It” and DID NOT end up with 7 pairs of Nike Elite socks and some really cool Retro Jordans.

Also, since most outlets (including the one we went to) are located in the middle of nowhere with cow pastures on both sides, I’m not sure we would make a special trip as the cost to get there eats into any savings.

But if you happen to be passing by an outlet it’s definitely worth checking out.

Ask the Reader: What is your take on outlet shopping? Worth it? Yay or nay?

We know pretty well the stores we want to hit, what we’re looking for, and the prices that we would expect to pay. If all those things fall into place, we can come away with a lot of merchandise, but if not, we can walk away empty handed. We’ve had both scenarios unfold to that degree as well as somewhere in the middle at various trips to the outlet malls. I agree, going around holidays will yield you the best deals.

We don’t go to outlets that often, but we have found deals there. The regular priced things at the outlet are not deals and often times it is the outlet brand. But my wife and I bought adidas sneakers for like $19 on clearance…cheapest sneakers I’ve ever gotten and they were great. Also as a AAA member, the outlet we go to gives out a coupon book where we find additional savings.

I went outlet shopping last Winter at one of the bigger outlets here in Minnesota and I was slightly disappointed about some of the pricing. The worst was the Under Armour “outlet” that had $40 shirts and shorts and called it a discount.

I think most outlets are not really that discounted UNLESS you find that awesome sale. We’ve had good luck at outlets, but you have to be careful that you are buying because you need it, not because it’s a good sale. I’m terrible if there is a Gymboree outlet. Something about matching dresses, sandals, and socks just makes me go nuts.

Stefanie @ The Broke and Beautiful Life

Good thing you didn’t have to make a special trip to get there. Once you factor in the cost of driving 1.5 hours, each direction, to the middle of nowhere- the “value” of the outlet is seriously decreased. Though, I have to say, I’ve always had a good time when I go and I’ve wound up with some great finds.

I generally like outlets, but you’re so right – some outlets have the pricing of normal stores! I found that out on my first trip when I was really let down. I just didn’t know where to go to get the good prices though.

I have not been outlet shopping in a long while, as I find the “brand name” quality of clothing to be subpar. I read that clothing companies make a lesser quality item with their name on it to sell at so called outlet stores, and that’s why they can sell it cheaper. Anybody else heard this, or experienced this? Give me Marshalls or TJmaxx any day of the week.

I love the Vera Bradley Outlet Stores. Everything is 50% off retail with a 70% off clearance section and special deals. During holidays, you can snage 20% off on top of that! My mom and I hit VB every time.

I love how you mentioned all the good deals you can find during Holiday sales. We are planning on having a girls trip up to Park City this weekend so we can shop at their outlets. I appreciate the tips on how to save money at an outlet shopping center.