9 Things NOT Worth Waiting ‘Til Black Friday to Buy

As we head toward the deals and coupons of Black Friday and Cyber Monday, I wanted to take this opportunity to highlight some things that are actually going to be a better buy before the big shopping weekend. Stuff that either doesn’t excite frantic turkey stuffed shoppers or always just seems to be on sale in early to mid November. See if you can take advantage of any of these deals this year and cross some names of your gift buying list at a MAJOR discount. 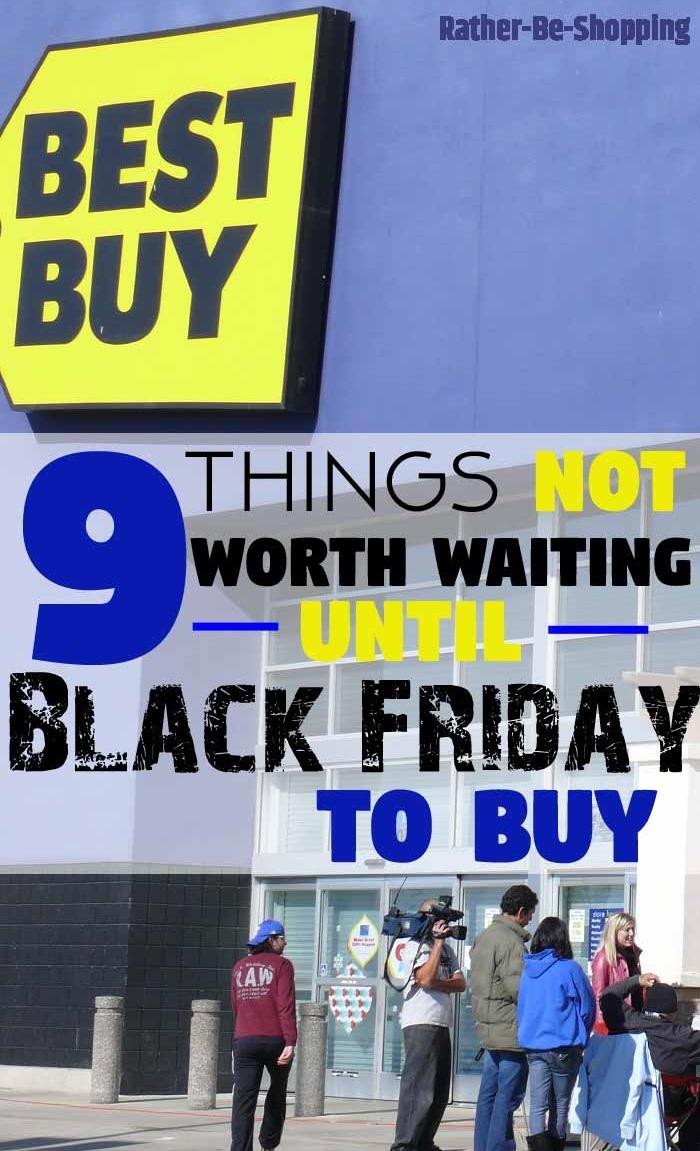 During the first couple weeks of November we always see an influx of deals on winter apparel on Rather-Be-Shopping, much better deals and coupons then you’ll find on Black Friday.

Retailers tend to try and sell older Fall inventory on BF and offer some screaming deals to entice shoppers.

But they seem to hold back on offering the awesome deals (ie, 40% off or better) on “in-season” jackets, boots, coats, winter sweaters, etc.

So I’d definitely shop for winter apparel now rather than waiting for Black Friday.

Cookware and houseware retailers realize many consumers will be shopping for pots and pans in preparation of Thanksgiving and Christmas feasts.

The crew here at Rather-Be-Shopping.com has noticed this translates into some great deals and coupons on new cooking sets making it a great time of year to buy.

Essentially you kill two birds with one stone, you get a new cookware set or piece and you also get to blow the socks off your guests with your turkey, stuffing, and gravy.

Speaking of gravy, I really love gravy. Smother anything with gravy and I think I could eat it.

My wife can attest to this one. She always stocks up on Halloween candy in early November as it’s really cheap because stores need clear it out.

As a matter of fact, we still have some Halloween Hershey Kisses in our freezer from last year.

By the way, have you ever had a frozen Snickers? One of my absolute favorites. Just make sure you have strong teeth before you crunch down or you might be heading to the dentist.

November is a great time to buy furniture as new styles and fabrics tend to come out around Christmas so stores are trying to clear out last season’s models.

Cost Plus World Market, for example, is selling all furniture at 25% off the original price with a coupon code.

Also, JCPenney.com is having their biggest furniture sale of the year offering products at up to 50% off the original price.

Both of these deals expire well before Black Friday weekend.

Don’t wait for Black Friday thinking car lots will be offering great deals as well. 2017 models are being cleared out right now and the longer you wait, the less inventory you’ll find to shop from.

If you head out on Black Friday weekend you’ll likely end up with the full-priced 2018 model as your only option.

Laptops (Not the Budget Variety)

Historically, budget, err….cheap, laptops are one of the hottest items on Black Friday and that doesn’t stand to change this year.

If anything, budget laptop deals will be better than ever this Black Friday. Early word has some pretty incredible deals surfacing.

But what if you are looking for a laptop that has stronger specs and won’t be obsolete in a few short weeks.

High end systems will not be on sale on Black Friday, so you’ll want to look for a deal now.

For example, we just got a coupon from Dell.com for $510 off the Inspiron-15 7000 touch laptop with the Intel Core i7 processor, 8GB memory, 1TB hard drive + FREE Shipping.

Many stores didn’t sell their inventory of patio furniture back when the temperature was 102 degrees, so now they are slashing prices to make room for fake Christmas trees and a blow-up Frosty the Snowman.

Their loss is your gain.

At my local Home Depot I saw a 8-piece patio set that normally sells for $699 marked down to an incredible $199.

If I didn’t already have some patio furniture I would have been all over it like white on rice. By the time Black Friday rolls around most of the great deals will be gone, buyer beware.

The wedding season is over and dress retailers need to clear out last season’s styles to make room for the new.

If you are planning a wedding for this winter or next spring right now is the perfect time to buy your wedding dress.

November is by far the best month to buy your dress and deals up to 75% off are available.

Look for demand (and prices) to go back up in January as many couples get engaged around the holidays.
Key stores to check: David’s Bridal.com, The Knot.com, and House of Brides.com.

Many media outlets say to wait until closer to Christmas (after Black Friday) to find the best deals on toys.

For the most part, they are correct. Our research, however, has actually found that the best deals are from the beginning of November until Cyber Monday.

In years past, coupons are better and site-wide toy sales are better in early November than in December.

Why you ask? Retailers are in the driver seat as we get closer to Christmas and won’t be offering many sales as they have a captive toy buying audience.