Did You Know Amazon Lets You Keep Some Items You Try to Return?

I was blown away the other day when Amazon told me to keep a product that I was trying to return. They happily refunded $15 to my credit card and actually told me that I didn’t have to send the item back. If I only had a use for 12″ hose clamps, then I’d be sittin’ in tall cotton. Here’s how the whole dealio went down and what Amazon told me when I pressed them on this strange phenomena. 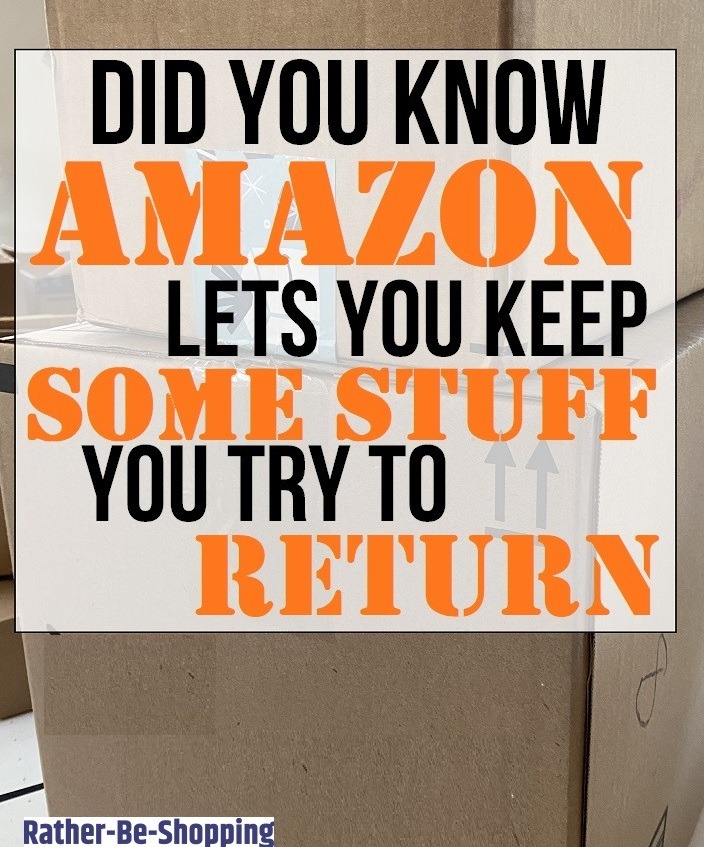 I recently ordered some hose clamps and failed to notice how big they were…turns out they were HUGE and completely unusable for my project I was working on.

So I hit up my Amazon account and started the return process.

As you can imagine I was quite surprised when I was told I would get full refund and NOT have to return the item.

So now I just have to figure out what to do with these ginormous 12″ hose clamps or find someone who can use them.

As you can see from the screenshot above, it was a horse hoodie that my daughter didn’t like.

She never wore it and it still had the tags on it.

So, much to my surprise I was told to KEEP the item when I initiated the return.

And yes, I got a full refund as well.

This Was Not a One-Off…

Then a few days ago, Allison Gormly, a consumer investigative reporter with WINK News, tweeted out that the same thing recently happened to her!

I just tried to return an Amazon hat that didn’t fit properly and got this message. Now, I keep the hat…and my money. Has this happened to you?? pic.twitter.com/d4TDYL7b4C

Then I started reading through some of the comments on her tweet and apparently it’s happened to a lot of Amazon shoppers recently.

And there seems to be no rhyme or reason to it.

It doesn’t seem to be a “price thing” as one commenter was told to keep an expensive electric lawnmower and another was told to a keep a Halloween mask.

It also doesn’t seem to have to do with whether the product was sold by Amazon or a 3rd party as my example above was sold by a company named GLIDESTORE and not Amazon.

So What Does Amazon Say About This?

So I figured that instead of trying to guess what was happening, I should go straight to the horse’s mouth and ask Amazon.

So I hit up Amazon chat and was told that since I said “I received a different item than the one I ordered, I didn’t have to return it.”

I then said that it was not actually the reason for the return, but they insisted I keep it and didn’t want to “hassle me” with returning the item.

This seems like a strange response from Amazon as I know for a fact that I selected “ordered by mistake”, not “received the wrong item”, as my reason for making the return.

So I Contacted Amazon Again…

The next day I started a live chat session with Amazon again trying to figure out exactly what was going on in the hopes of writing a useful blog post about this.

I was told the specific Amazon 3rd party seller who sold me the hoodie was not taking items back.

I then asked if this was a COVID-19 related issue as some retailers are not taking back clothing in certain areas of the country.

The chat rep said “Yes” it was more than likely a COVID issue as to why the seller didn’t want the item back.

The rep then told me I could keep, dispose, or donate the hoodie.

See Also: Amazon Sent Me a $339 Item I Didn’t Order…What Happened Next is Crazy

Can You Trick Amazon Into Getting a Refund?

I was curious if I could “game the system” and tried to return a bunch of different items to try and trigger a “keep it and we will still refund you” response.

I was UNSUCCESSFUL on every attempt, even those where I choose “received the wrong item” as the reason for my return.

I tried to return a dozen different items and Amazon wanted me to mail them all back in order to get my refund.

So this is definitely NOT a way to scam Amazon, so don’t try it at home.

But rather it seems to be a completely random “Amazon surprise” when it actually happens.

So enjoy it and hopefully you can actually use the free product or donate it to somebody that can.

Are Other Retailers Doing This As Well?

For a while Walmart was not accepting in-store returns on clothing but has since returned to their regular return policy in most states.

Ask the Reader: Has Amazon ever told you to keep a product and still refunded your money? If so, what was the item and was it sold by Amazon or a 3rd party?

This happens to me often, actually!

Interestingly enough since they changed their “free returns” where I could put package on porch for UPS or go to “my local UPS facility (25 miles so 50 round trip from my rural location) at no cost to me, returns are disappointing. I am far more shy about what I will *try* particularly with clothing. A fabulous lightning deal loses all its sparkle when it costs that much to exchange it plus the cost of the item. Further I am disabled & don’t have independent transportation so combining town errands to better justify the trip isn’t even an option I can indulge in. If anyone knows a fabulous hack for THAT conundrum, I would LOVE to know it!

This just happened to me today. I ordered a tshirt via Amazon but it wasn’t exactly what I had expected. Amazon sent me an email telling me they had refunded my $19 and that I did NOT need to return the item. So I scored a free shirt apparently.