Will Amazon Honor the Wrong Price on Their Website? (Even After I Hassle Them?)

I was laying in bed the other night doing some shopping on Amazon via my smartphone when I encountered a price that was SO good that I sat bolt upright. Yes, I may have a problem. I noticed a REALLY good deal on a new coffee maker directly on the Amazon homepage featured as a “Deal of the Day”. What happened next was quite surprising. Here’s how it all went down… 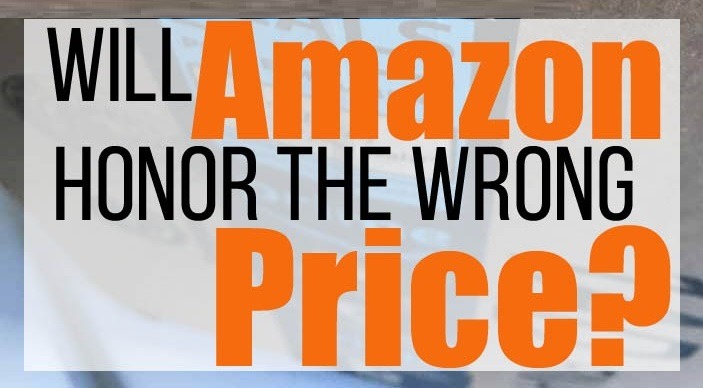 A Screaming Deal on a Coffee Maker 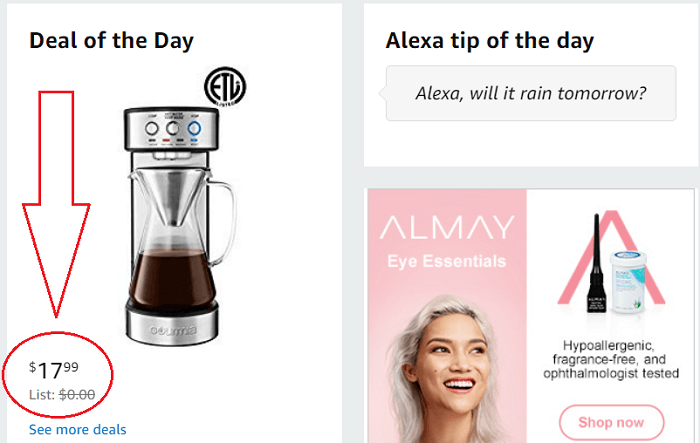 What would you think if you stumbled upon the Gourmia Pour Over coffee maker pictured above on the Amazon homepage?

Would you think the Amazon price was actually $17.99?

For obvious reasons, I definitely did. But then when I clicked on the coffee maker it took me to the product page with a price of $149.99.

I was like, what? They should honor the lower price, this is false advertising.

So I crawled out of bed and started investigating.

See Also: Stores That’ll Give You the Lower Price If Item is Stocked in Wrong Spot

It Was Late…So I Hit Up Amazon Live Chat

Seeing that it was almost midnight I went on my laptop and started a Live Chat with Amazon.

In retrospect, I should have called Amazon as live chat operators have ZERO authority to give me the lower price.

I politely explained the situation and even sent the operator a screenshot of the coffee maker with the $17.99 price tag.

The first operator I chatted with said the $17.99 was simply a reference to “some items in the coffee category being priced as low as $17.99”.

I called BS and asked for his supervisor.

The next 2 chat operators told me basically the same thing and neither one admitted to any mistake by Amazon.

While I’m chatting with Amazon guess what happened?

Yep, the powers-that-be removed the “Deal of the Day” coffee maker at $17.99 and replaced it with another item.

They clearly realized their mistake but were not about to admit it OR give me the lower advertised price.

What Does the Law State About This Situation?

Is a company obligated to sell a product for their lower advertised price, even when it’s an honest mistake?

I took this question to the Internet and discovered some interesting information.

From the San Francisco chronicle, “In general, there’s no law that requires companies to honor an advertised price if that price is wrong. But don’t expect customers to be happy about it.”

In other words, if it’s a simple mistake it is NOT false advertising.

This makes sense as a pricing error could be disastrous for a small business struggling to get by.

But I know for a fact that many big box stores and websites will give you the lower price if the price difference is not enormous.

Ask the Reader: What say you, should Amazon have given me the lower price?

Have you ever spotted a price, either online or in-store, that was clearly wrong? Did the store or website give you the lower price? Let me know in the comments.

I have seen incredibly low prices on Amazon and it turns out they are put there by scammers in the part of the site where you purchase from merchants outside the Amazon “family”. Anyone can set up a “store” and advertise things. When I tried to buy these things…it happened twice….I just never received anything and my credit card was not charged so apparently there is some oversight from Amazon with regard to these outside businesses. It did look as though the sale went through as usual, however. I did receive a notice that the item was “no longer available” but that was after several weeks. I knew it was too good to be true and I didn’t give them any new information, just checked out through the regular Amazon cart. Amazon had my credit card; the scammer didn’t get to see it so no harm…this time. I’ve learned; if it’s too good to be true, run the other way!

I can take this a step further – I actually completed an order through Amazon AND received a confirmation with the incorrect price, but the next day, Amazon sent me an email stating that the advertised price was incorrect and that they weren’t going to fulfill the order. Then they unilaterally canceled the order. I have a huge issue with that, since this wasn’t just a special deal I saw, but an actual completed and confirmed order, so I escalated the issue (at great challenge from the customer service reps) multiple times. The result was that I was told that Amazon reserves the right to cancel any order for any reason and that they absolutely did not care about their mistake or keeping me as a customer. I’m a Prime member that buys a lot – for both personal and fit my business, but they couldn’t have cared less. I even advised them that I would be filing a complaint with the FTC, and the response was, “Do what you need to do.”

That is absolutely sad, I am currently facing the same situation and about to call Amazon, already chatted and the chat person pretended they did not understand and apologized and repeated the same thing on and on, as I was dumb… IT IS ON AMAZON website, I am a prime member, I do a lot of shopping… just like you… lets see… should I waste my time or not?? I will at least call them once and record and share here so you girls/guys will have a nice Amazon recording to enjoy… I will post also the chat transcript. Lets starts something, we cannot let Bezos and Amazon rule the world without us, the customers, being protected and well treated with dignity and respect and honored with what is advertised on their website, but even more, we deserve not being lied to.

Last night, I purchased three cedar flower boxes from Amazon, at an excellent price. I got a confirmation by email.
This afternoon, I received a call from an Amazon Rep and she said they would not honor the price as it was a ‘glitch’ in their system. (She wasn’t pleasant to talk to either).
I am a prime member (apparently, which does not mean anything) and purchase often.
Now, with the pandemic, I’ve been ordering more frequently and receiving a delivery, almost everyday.
We need a governing law to protect online customers!

“In general, there’s no law that requires companies to honor an advertised price if that price is wrong.

But there are laws which state that the price advertised or displayed with the product be the correct price. Depending what state or country you live in or buy from for that matter. Now here lies the problem that Amazon uses AI to constantly adjust prices for there own and third party sellers products as well. Which in turn also polices or supposed to police over and under priced items… They use the AI, they made the company what it is then they should deal with consequences of the situation… They could solve this by reverting to have more people manually check over the AI results, have less products, dont use third party sellers or just not be a business all together. If AI failed to send me an important document due to auto Gmail filters then who do you think is going to suffer because of that “error”…… Any price affixed representing the cost of product is an advertised priced….period… Whether in store, online or whatever it may be. Any public display of a cost for a product is in fact advertising a price. Yes, loss has occurred and damages were dealt. You lost the ability to have purchased the item at the advertised price and now deal with the emotional damages of not receiving the item and now everytime you see a that’s cheaper than what seems “normal” you don’t know what to do because big retail can just kick your concern to the side and get away with it. Do you try and purchase only to get shot away or do you not attempt and then miss out on some insanely good deal? Its not like these companies have never had deals like that before… Just because a law doesnt say they have to honor the price doesn’t mean that they aren’t breaking any either. Fight, don’t bow down.

When a price is obviously an error let it go people!!! Someone somewhere made a mistake and you’re trying to take advantage of that mistake. Let’s hope that you NEVER make a mistake in your line of employment that can be forgiven by someone on the other side simply not being a stubborn a.

Oh did I ever! I was looking for critter nation cages, the double is normally retailed at $652 on Amazon. I was checking them almost every day to tempt me into biting the bullet. The day before black Friday it came up black Friday deal $248. Umm yes please, placed my order, the next day it was back up to $652 but luckily the fulfillment and shipping went through same day, I’d imagine before they corrected the mistake or I was the reason they did so 🤣