Costco Liquor: 4 Things You Gotta Know Before You Buy

Saving money by purchasing Costco liquor is one of the many terrific ways the warehouse club can help you save. But before you buy alcohol from Costco in the future, there are a few important things you should know. So whether it’s beer, wine, or hard liquor, be sure to shop smart, sip enthusiastically, and above all, drink responsibly. Cheers! 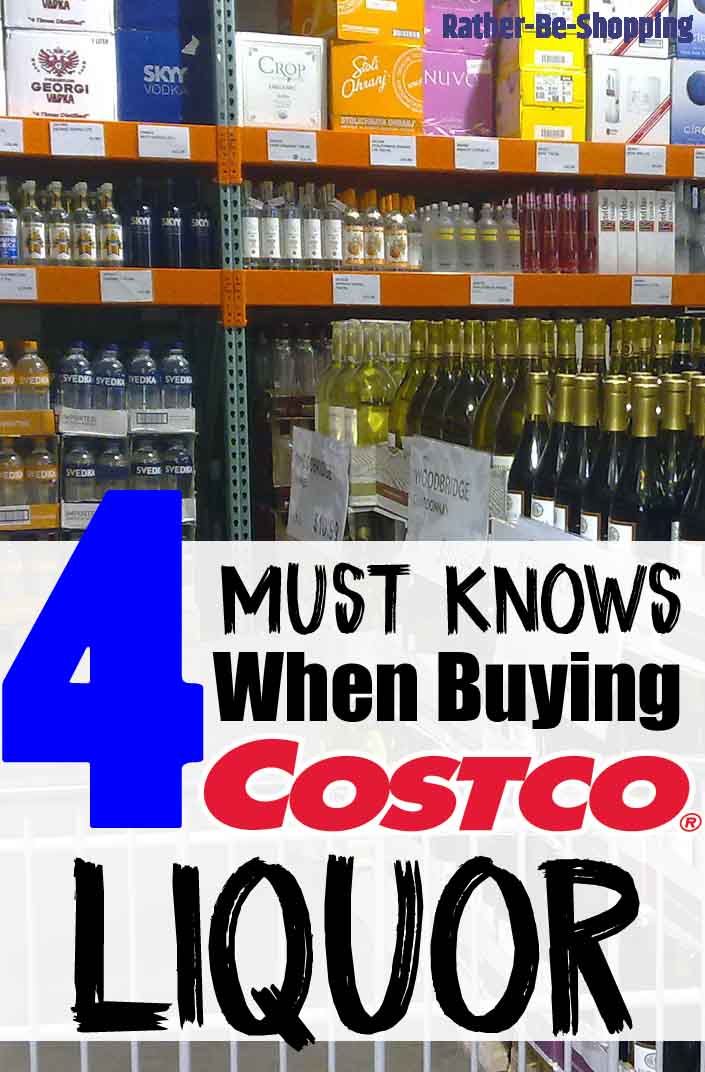 1. No Membership Required to Buy Costco Liquor (in Many States)

Thanks to a little known post-prohibition law, some states cannot require a membership to buy alcohol for off-site sales. With their $60 annual membership, Costco fits the bill.

I contacted Costco and they informed me that the following 14 states allow you to walk into the warehouse WITHOUT a membership and buy liquor.

When you enter the Costco warehouse, simply tell the card checker and they’ll either wave you threw or direct you to the membership desk where they’ll give you a temporary pass for alcohol sales.

2. Kirkland Alochol is Often Made by Name-Brands

Let’s face it, Costco is not in the business of making their own wine, beer, scotch, tequila, etc.

So how do they produce their high-quality Kirkland brand alcohol? It may (or may not) come as a surprise that they outsource it to well-known distilleries, wineries, and breweries.

When you buy Kirkland liquor you often end up with a very high quality product at a savings in the 20-40% off range. I’ll drink to that kind of savings any day.

When it comes to Costco liquor outsourcing, here’s what we know (or speculate) so far:

And now for the wine at Costco, I think they deserve their own section…

Am I missing any? Let me know in the comments below, thanks.

This might be the single best reason to buy your liquor only at Costco.

According to this FOX News article, “The average retail liquor store’s markup is 25 to 45 percent on products, but Costco maintains a 10 to 14 percent markup.”

The bottom line is that Costco makes money by selling large quantities at a lower markup and this holds true with their alcohol as well.

An argument could easily be made that you’ll recoup your $60 annual fee by the savings you’ll get when buying wine, beer, and liquor from the warehouse giant.

Be aware that if you’re planning a large liquor purchase from Costco for a wedding or special event, you typically cannot return the alcohol you don’t consume to Costco.

Opened or unopened, you’re stuck with it in most states.

To help you out, here’s a list of states that do allow for alcohol returns.

But keep this in mind, if you do live in a state that leaves it up to the discretion of the store, most stores still won’t accept unopened booze.

This is because stores cannot resell the alcohol. They have to either take the loss, or return it to the distributor for less than they paid.

If you live in Canada, you’re probably aware that only 2 provinces currently let you buy alcohol at Costco.

They are Alberta and more recently Saskatchewan.

They call them “Costco Liquor Stores” and they actually have separate entrances from the main warehouse.

The best part? Costco does NOT require you to have a membership to enter the alcohol stores.

Ask the Reader: Do you buy Costco alcohol on a regular basis? Besides the lower price, what do you like about it?

What about Canadians? When do I get to save on alcohol?

Who makes their Gin?

I just moved to New York and I found the prices to be very high for spirits. Costco stores in New York don’t have liquor in their own stores but have adjoining third party stores that sell liquor. More as an accommodation to Costco buyers.

I came from Illinois where Costco stores sell liquor. I’ll be buying liquor in the midwest and driving them in my car for consumption in New York.

Now, to check prices of liquor in adjoining Costco’s in Wisconsin and Indiana where their overall governmental taxes are cheaper than Illinois’ …

spiced rum is good for mixing, staight on ice, not so much.

one problem i have is i like to look online for products, whether its liquor or grocerys because of vision, then go purchase the items, i can’t find any online actual products to shop for at any of their locations in san antonio tx, ive been wanting to try the kirkland silver for a while, not anjeo of any company, nasty stuff with all sorts of tastes in it, i believe the product im looking for is kirkland traditional silver 100% blue agave, someone told me it isn’t sold in the san antonio stores. ive been inside one of their locations here and it was impressive for sure . thanks

Not sure which winery, but it comes from Sonoma County in California near Napa.