Frugal Hack #16: How to Negotiate a Great Deal with Dish Network

If you’ll recall, and nobody will, that my first ever Frugal Hack was about a secret Dish Network programming plan that they don’t advertise which gets you 50+ channels for only $19.99 a month. Pretty darn good deal, right? I know many of my frugal readers have already cut the cable cord, but if you’re a sports fan, like me, your options are pretty darn limited.

After all, you’re not going to get ESPN with the $19.99 plan, or the Discovery Channel, or Fox News, or TBS, or TNT. By knowing how to negotiate a deal with DishNetwork, you’ll learn how to get many of those channels without a significant increase in your bill.

Also, it is worth mentioning that the strategy I’m going to describe will work for any cable or satellite TV company. If done correctly of course!

Here is what my goats think of my once expensive Dish Network bill: 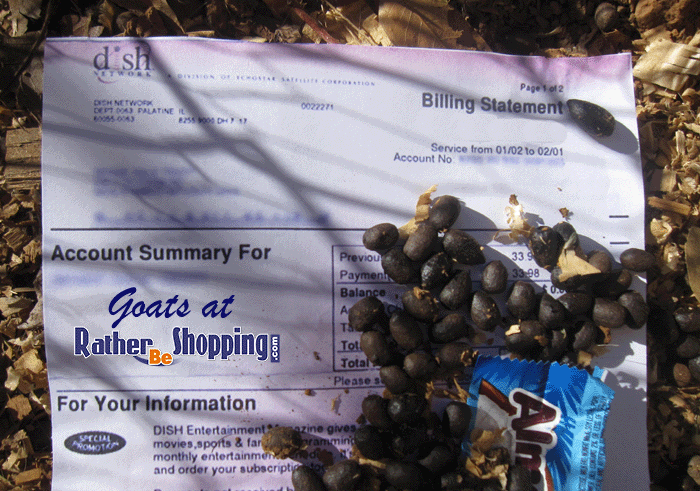 The first thing you have to do is analyze your situation. Are you currently under contract with your cable or Satellite company? If so, this hack is going to be much more difficult to pull off.

Next, find out what the competition is currently offering. If you know this info like the back of your hand you’re going to get some serious street cred when talking to the rep.

In my case, DirectTV was offering a special promotion of $29.99/mo. for 12 months for something they call the “Choice” package. It offered 150+ channels, including ESPN, and was going to used as my ammo when shooting for a better deal.

UPDATE: – DirectTV is ridiculously expensive these days and doesn’t give you much power to negotiate anymore. Instead, when you make the call to Dish to negotiate, tell them you plan on using Hulu Plus and Netflix along with an HD Antennae. I just did this and got the screaming deal of $45 off my bill for 12 months with the America’s Top 120+ package.

Next, you call the DishNetwork 1-800 number and tell the first person you speak with that you want to cancel your account. They’ll ask “why?” and you’ll say “I have found a better deal with a competitor of yours.” They’ll immediately put you on hold and send your call to the customer loyalty or customer retention department.

The name varies by company, but the bottom line is you’ll want to talk with these guys as they are the ONLY ones authorized to give you the kick-ass deal you’re going to ask for.

Be Polite, But Persistent

Here is how the convo went:

Me: “Yeah, hi, I want to cancel my service today.”
DishTV Rep: “I’m really sorry to hear that. Is there any particular reason you want to cancel?”
Me: “I found a better deal with Direct TV and want to switch.” I then explained the package I mentioned earlier.
DishTV Rep: Silence. Then she says “Well, we’d really like to keep your business. For you to get a similar package with us, it would be the America’s Top 120 and it typically is $49.99 per month. But today I can lower that to $39.99 per month. Would that be OK?”
Me: “Well, I appreciate that offer, but like I mentioned, DirectTV is offering a very similar package for $29.99 per month. So I guess I’ll just go ahead and switch.””
DishTV Rep: “Let me talk to my manager and see if we can come down any further.” Silence and some whispering. She comes back on and say, “I have authorization from my manager to offer you $35.99 which is $14 off the regular monthly price.”
Me: “Well, I appreciate that but I think I’ll just go ahead and switch.”
DishTV Rep: “Let me ask again if we can meet the $29.99 a month deal.” More semi-silence. I don’t think she was actually talking to anyone, just playing solitaire on her computer while pretending too. She finally comes back on and says,”Yes, I have authorization to offer $29.99 a month for a 10 month period.”
Me: “That is awesome, thanks so much! So, after the 10 month period I’m not put into a contract to pay $49.99 a month or something?”
DishTV Rep: “No, you are not under any contract at any point.”

I got off the phone, immediately did my happy dance, then wondered how low she would have gone. Maybe $19.99 a month? Maybe a bunch of free movie channels as well? Has anyone gotten a better deal than the one I got? I’d love to hear about it and how you pulled it off.

After the ten months are over, I plan on calling them up and doing it again.

So stoked to finally have ESPN, especially with the start of the college basketball season!

Ask the Reader: Do you pay more than you would like for cable or Satellite TV? If so, it’s about time you did something about it before your goat takes matters into her own hooves.

I am new to dish just got it I have the hopper and the Joey. I have the American top 250 and I’m paying $102. A month that’s a little high for me any suggestions

I got $40 off my bill for 10 months…for the second time. I will call again in 12 months. They start at 15 then 25 then I just said look, I got 40 off last time and that’s what I want again. He said let me check…and came back on and said ok. Just be polite, but firm and mention new customer offers and how long you’ve had dish.

I am paying over $90 a month and that is rediculous.I am a recent widow and can not afford this………Need a change

We cancelled today after 6 years with Dish since we wanted to cut costs. Called dish customer service this morning, disconnected service.

Later in the afternoon dish called me. Asked why we cancelled and offered same service for $22.02 including taxes for 1 full year.

Didn’t plan any of this, but hey if I am saving 60 plus dollars a month, why not?

Im a retention specialist supervisor at a internet company. these are great things for all consumers to be aware of but there are some variables that are in play when you contact retention that should be kept in mind. don’t get greedy because if agents notice frequent calls regarding credits or problems then you could shoot yourself in the foot. Agent’s are supposed to investigate history in the account to make sure you aren’t credit shopping it’s very easy to tell and notation will no doubt go on the account to be suspicious. when that is on your account and an actual problem occurs where you deserve to be compensated. It won’t happen.

Another thing I stress to my customers is to keep documentation of order numbers and agent names or id’s and date of the call’s. Agents like me really want to help and if errors have occurred and your able to back it up with some information not only will the process be faster but we would be greatly inclined to fix the problem especially if you are pleasant. also don’t just call and say you want the disc. Some agents are not confident enough to go bold and really try to save if you show any hostility don’t make the problem bigger then real life because they may not offer if they don’t think you will react well or accept it.

I have not had a day go by where I haven’t been told by customer’s that they were really upset they didn’t receive me first because my offer is lower then the competition they just got installed. It’s a lose for you and a even bigger lose for the good agent who was wanting to help because they receive the hit for not saving you. even if your not, make the impression you are ready proceed with leaving with them if the agent can’t help fix the problem. that stops the buck with them. If your still wanting to disconnect, make sure where you are going doesn’t have similar policy. hope this was helpful

Wow! That’s awesome that you’ve had such a great experience with them! Sadly, they gave my dad a big headache about switching over companies, and then made him pay a cancellation fee! I’ll keep this tactic in my head though, thanks!

Anyone who has called Dish knows the story recited above is 100% fiction. That call and deal never happened.

Our contract has been up for a few months now. It immediately doubled in price at the end date and I called to negotiate a lower price and all I got out of it was the lowest pkg they had which was what we had paid for two years for the 250 channel pkg. i think we get 120 channels and most of those channels are repeated channels of the same exact shows like QVC, HSN and many other junk channels. We pay $95/mo now for nothing so I think we are ready to cut ties and live with Netflix and Hulu.

The Key is…you HAVE TO ask for Loyalty Department (or Retention Department). I called DISH Network to complain, was on the phone for almost 2 hours, spoke with the first representative, waited on hold to speak to her supervisor, who both told me there was little to nothing they could offer me. I kept getting the run around. After asking for the Loyalty Dept., I spoke with a rep who apologized for the other two I spoke with and said there was actually LOTS they could offer me because I had been a customer for almost 8 years. I saved over $60 a month and they locked that price in for two years! I also got free insurance for a few months (in case I had future problems, I would not have to pay for a technician). These Loyalty reps are more knowledgeable and actually TRY to find you savings, instead of only offering you just what the initial C.S. Rep would tell anybody who called in on any given day.

Good job, Kristi. Just be aware, at the end of that free insurance they will begin billing you for it, without notifying you. In the future though, if you are having problems and need a tech to come out, just go online and add that service at least 24 hours in advance of placing a service call. Then when all is good, cancel it again. No harm no foul. $60 is a good deal too. They are trying to cut $10 off of mine and I’ve been with them for 12 yrs. the 10 dollar cut, is after my 2 yrs is up, which then increased by 20. so, no deal really. I’m now researching many other options.