I can remember as a kid we would eat Kentucky Fried Chicken often enough that my parents would keep the big buckets and use them for storage. Seriously, no joke. I remember one KFC bucket in particular that held mismatched nails and screws that my Dad would use around the house. But over the years I grew a bit tired of their chicken and I really wish I had known about the KFC secret menu as it would have been a great way to try new food and get some different flavors. With that said, here’s how the secret menu at Colonel Sanders currently breaks down. Bon appétit. 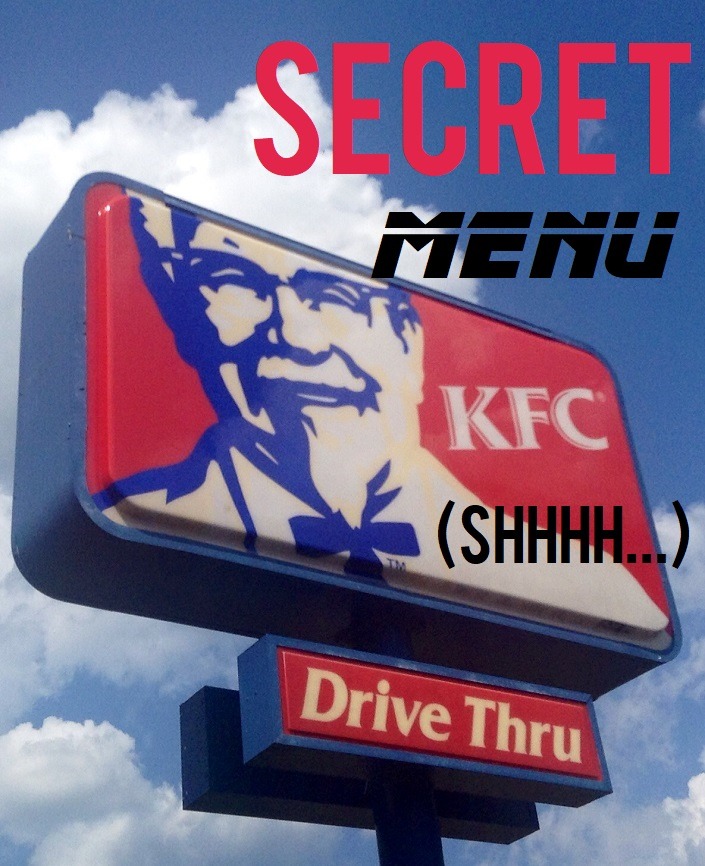 “Bacon…on Anything” is pretty much my life’s mantra, especially when chowing down at Kentucky Fried Chicken.

A little known KFC secret is that you can get bacon added to whatever you want, all you gotta do is ask.

Get in the habit of adding bacon to any bowl, sandwich, or entree and your life will improve by exactly 67%.

Price and availability differs by location….but ask about it and you’ll probably have your lifelong wish of “more bacon” granted.

2. Biscuits on the Side

How many times have you wished you had a biscuit to soak up all the gravy, juices, and crumbs left on your plate?

The price per biscuit varies by location but they aren’t expensive and totally worth it IMO.

See Also: The Chick-Fil-A Secret Menu: Fun Ways to Spice Up Your Next Meal

3. Build Your Own Bowl

If you’ve ever had a bowl at KFC you know just what a yummy concoction it can be.

But did you know you can create pretty much ANY bowl you want?

You just ask for it and they’ll build it.

Have them throw some fries in it, or maybe some bacon, or even some Nashville Hot sauce if you want to spice up your bowl.

The possibilities are literally endless.

The Double Down was once on the regular menu at KFC, and still is in some locations.

If you’re not familiar with this bad-boy, it’s a chicken sandwich but instead of using a boring bun, they use 2 flat chicken fillets that are fried to crispy perfection.

Then in the middle you add melted cheese, some bacon, and a little of the ol’ Colonel’s secret sauce.

Dang, I think I can almost hear my fat cells screaming “I WANT”, “I WANT”.

It will have some kick for sure and the beans will add a nice crunch to an otherwise bland bowl.

You can also substitute the beans for corn if you’d like.

I can’t think of a Hot Pocket and not think of Jim Gaffigan.

But anyways, if you’re a fan of the hot pocket, some KFC locations can whip you up a bowl with cooked dough, chicken, cheese, corn, and of course, lots of GRAVY.

Just a heads up, your mileage will vary greatly on this one as most KFC locations don’t have all the needed ingredients.

On my brother-in-law’s advice, I tried poutine for the first time ever last year and was immediately HOOKED.

This Canadian treat is made with french fries, cheese curds, then smothered in gravy.

Sounds different I know, but trust me, it’s a REALLY yummy combination and now you can order it at KFC too.

If the employee has no idea what you’re talking about, just tell them the 3 ingredients and they’ll hook you up with this secret item.

This heart stopper is essentially the Double Down (mentioned above) but they add a THIRD piece of chicken to the center along with the bacon, cheese, and sauce.

While I’ve never ordered this monstrosity, I’m guessing you’ll need to eat it with a knife and fork unless you were born with a hinged jaw.

If you’ve ever had the Zinger Chicken sandwich at KFC you know it’s quality grub.

Order the Zinger Stacker from their secret menu and you will score twice the chicken and cheese.

Specifically, you’ll get a slightly toasted bun, 2 fried chicken fillets, both topped with cheese, along with chili relish and their spicy “super charger sauce”.

Sounds amazing, just stay close to a bathroom if at all possible.

Ask the Reader: Have you ever ordered anything from the secret menu at KFC? Maybe you know of an item that I didn’t include. Let me know about it so I can do the “work” required to test it out.