While it’s always fun to talk about the best buys at Costco, it can often be more helpful to breakdown the items that provide the least value. The stuff you’ll simply want to buy elsewhere and save money in the process. Here are the 12 items that are a bad buy at Costco, many of which will probably surprise the heck out of you. 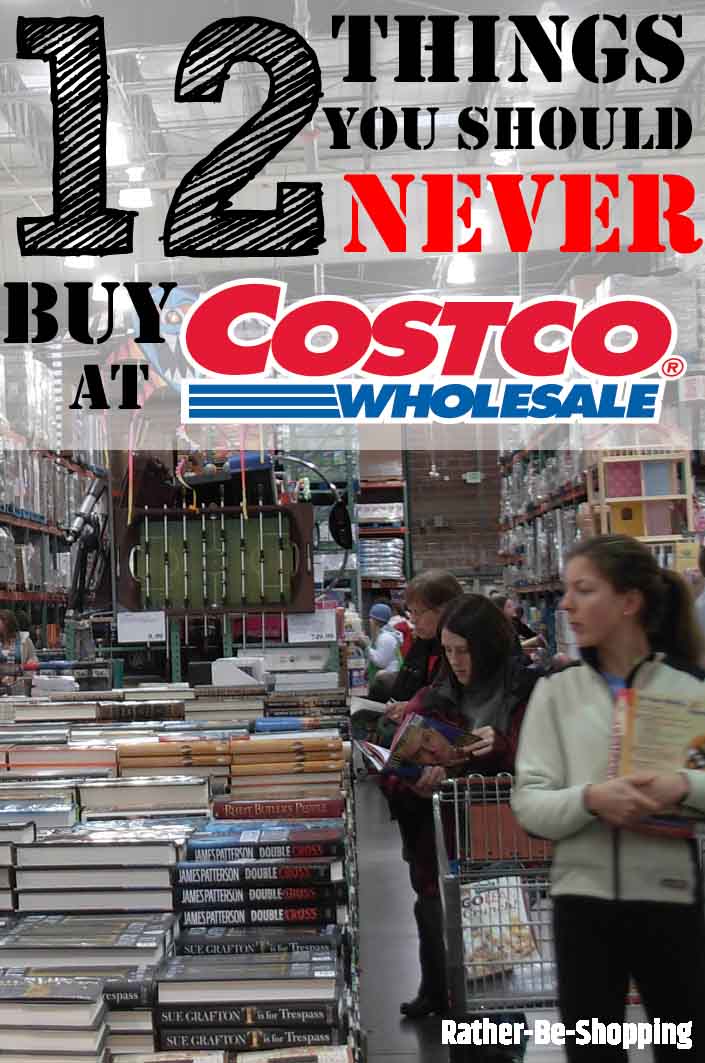 Big Vats of Almost Anything

Due to the expiration dates on things like mayo, mustard, yogurt, eggnog, and ketchup, it’s often a bad buy to purchase these in large quantities at Costco.

After all, saving a few bucks upfront is not worth it if you end up throwing it away before consuming it all. This advice extends mainly to those without a household full of hungry kids.

Here are the average expiration dates on some of these popular items to help you determine if you should be buying them at Costco or not:

Mayonnaise: Once opened, it will store safely in the refrigerator for up to 2 months.

Yogurt: Will typically keep for 7-10 days after the sell by date.

Ketchup: Will keep for up to 6 months in the refrigerator.

Peanut Butter: Opened PB will last up to 3 months in the cupboard.

Pickles: Surprisingly, these will last for an entire year in the fridge.

Sour Cream: You only have 2 weeks to consume a tub of sour cream.

Mustard: 1-2 years past its expiration date when left unopened in the pantry.

Butter: It will last 2 weeks past the expiration date.

Any other items I should add to this list?

While it can be enticing to stock-up on diapers at Costco, you should look at the Amazon Subscribe & Save program, and get them for 20% less on average.

Throw in the fact that you’ll get them delivered for free to your front door, and it makes Amazon a really good deal.

For example, at Costco you can get Huggies (size 2) for $0.23/diaper, compare that with an Amazon subscription and you’ll only pay $0.14/diaper. May not seem like much savings, but for a box of 246 diapers, you’ll save a significant $9.84 by staying away from Costco.

Similar savings exists for other popular brands like Pampers and Luvs.

I always see shoppers walking around the Costco warehouse with shopping carts full of “snacky” food like granola bars, chips, crackers, jerky, and the like.

I often wonder what the heck they’re doing as the per-unit price of most of that stuff at Costco is more expensive than at your discount grocery stores, especially when you can combine sales with a coupon.

Also, you risk buying more than you’ll actually eat, and end up having to throw some of it away, or end up feeding it to your chickens.

With 3 kids in the house, we buy a lot of cereal. Cheerios, Frosted Flakes, Cinnamon Toast Crunch, Corn Flakes, the occasional Fruity Pebbles…you get the idea.

We always find it cheaper at our local Winco Foods discount grocery store, ALWAYS. The savings with a coupon is even greater. Don’t let the bigger boxes at Costco fool you, they’re almost always more expensive per serving then what you can find at the cheapest grocery store in your town.

Be sure to do the math on your next shopping trip and you’ll see the difference too.

Are you aware that sunscreen can actually expire and lose its effectiveness? I sure wasn’t.

Some dermatologists actually suggest “using up” a bottle within two months as the active agents can decompose over time.

For this reason, it’s risky buying sunscreen in-bulk from Costco unless you’re lathering up several kids every morning. Instead, look for deals at Walmart or Target on more reasonably sized sunscreen bottles.

While many shoppers think Costco is the best place to score a deal on books, music, and DVD/Bluray movies, the fact of the matter is you can typically find lower prices on Amazon or at Walmart.

Also, let’s not forget about your local thrift store as it’s a great place to pick up “new to you” books for pennies on the dollar.

Instead of buying in bulk from Costco, use a printable coupon, along with a sale, and stock-up for less at the grocery store. Besides the grocery store, look for deals at Walmart, Target, and even drugstores.

We’re talking significant savings too. Up to $0.20 a laundry load less when compared to a Costco Wholesale club.

Paper plates, napkins, and plastic silverware, you’ll almost always find them cheaper when they go in sale at grocery stores.

This is especially true when you can combine store and manufacturer coupons on your paper goods.

These paper products are pretty easy to store in bulk, so be sure to stock up when the price is right and you’ll get them cheaper then if you made a trek to Costco.

Beware that whenever you see name-brand clothing or shoes at Costco, they are often made specifically for the warehouse club and are of lesser quality.

Brands where I personally have noticed lesser quality include Levi, Reebok, Hanes, Champion, and Adidas. Instead, buy higher quality name-brand clothing, at a major discount, from stores like TJ Maxx, Ross, and Marshalls.

Tasty fruit like peaches, tangerines, strawberries, raspberries, and blueberries are typically darn expensive at Costco. Be sure to check the price per pound as most grocery stores will beat their price by 15-20%.

Due to limited colors, thread counts, sizes, and a higher price point, Costco is not the best place to shop for bed sheets, comforters, and towels. Compared to Costco, you can typically save 30-40% more by shopping for these items at TJ Maxx, Ross, and Marshalls.

Also, keep an eye out for sales and coupons at stores like JCPenney, Bed Bath & Beyond, and Macy’s to score a deal better than what you’ll find at your local Costco.

Ask the Reader: What items on my list do you agree with? Also, let me know if you disagree on any of these and I’d be happy to investigate further. My goal is to keep this information up-to-date and accurate. Thanks.

Not the best place to shop for bed sheets!!! ????
I have to strongly disagree on this one! those Charisma sheets are AWESOME, super nice quality, cooling (living in South Florida), great designs and colors. Believe, I’m as stingy as it comes, I’ve search until the end of the days before buying, never found this great quality for only $16/set.
Wait, Wait, the deal will come again! for sure.
Charisma Microfiber 6-piece Sheet Set, Printed
https://www.costco.com/Charisma-Microfiber-6-piece-Sheet-Set%2c-Printed.product.100480659.html

Yes I have bought them, best quality for the price

If nothing else they have the best meats around

You bet…. Costco meat is Premium compared to buying from Sam Club and BJ’s which both sells soiled meats, yuck!!

This really helps me at Costco!! I got all of the right stuff

Your opinion is just that, an opinion. I disagree with everything you said. Georgia Costco beats prices for everything we buy when it’s on sale and sometimes even when it’s not. When you have a big family, bulk is best.

You don’t address the issue of the Kirkland Signature brand items. In most categories, these items are as good as, or better than name-brand equivalents. It may be true that you can find cheaper name band paper products and bulk snacks (for example) elsewhere. But we haven’t found anything to beat the KS brand versions of these products.