The Smartest and Dumbest Buys at Your Local Walmart

The mention of the word “Walmart” can cause quite a divide among shoppers. Many love the low prices and selection and shop there regularly, while others vow to never set foot in Wally World for other reasons that I won’t go into today. But putting differences aside, there is no arguing the fact that Walmart contains real deals and real duds.

According to an article recently published on GoBankingRates.com, by being able to spot the items that provide real savings, and the ones that don’t, you can save significant money. Below I break down a few of my favorite deals and duds from their article to help you save on your next trip to Walmart. 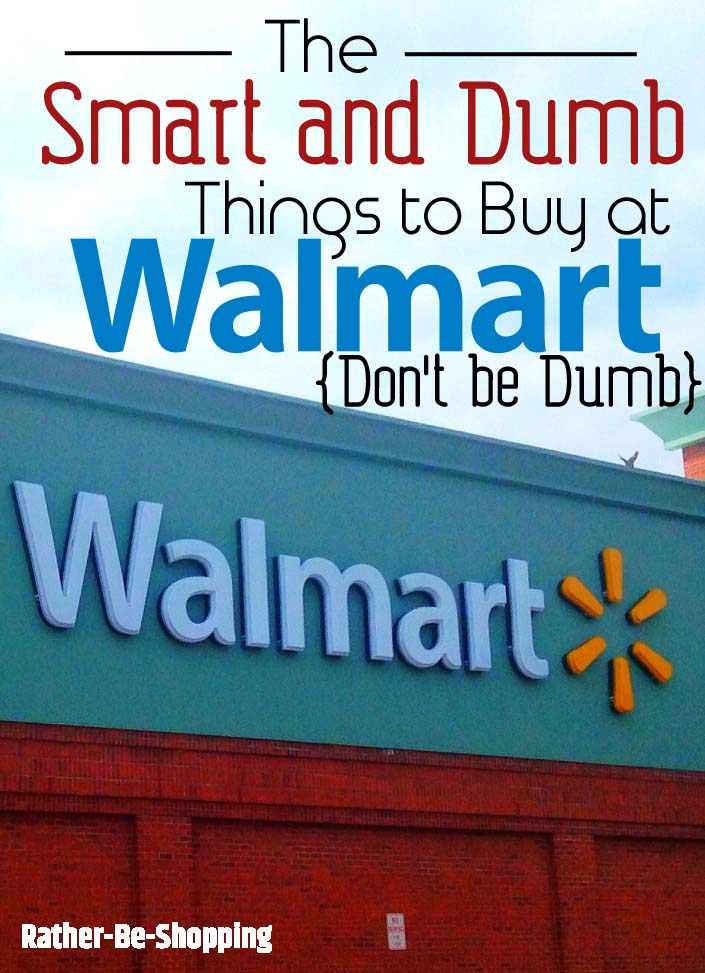 First, let’s start with a few of the best buys at Walmart according to GoBankingRates along with a little commentary from yours truly.

The article calls this “Simple Furniture” which is clearly a nice way to say “cheap”.

In most cases, Walmart is cheaper than IKEA on desks, bookcases, entertainment centers, and the like.

I’d worry that paying less than IKEA means the stuff simply won’t hold up as long, and you’ll accrue replacement costs making it not that great of a deal in the long-run.

Having three kids who’ve all been into Legos at one time or another, this was news to me. Shame on me.

Apparently smart shoppers have long been aware that Walmart typically beats Target and Toys R Us on price. What about Amazon though?

Yeah, I’ve noticed some good coffee and tea deals at Walmart too.

But for the money and quality, it’s hard to beat the Kirkland brand from Costco that I found for sale at Amazon for some strange reason.

I’d be curious to know if they get their organic foods from the U.S. or other countries where the standards for “organic” are lower and thus so are their prices.

Apparently, you can get 4″ x 6″ photos for 9 cents apiece at Walmart. Seems like a good deal compared to 15 cents at Shutterfly, 12 cents at Walgreens,  and 15 cents at Target.

Next, let’s delve into some of the items where you can get a better deal elsewhere.

I love this one. Walmart sells a ton of different gift cards, but the problem is, they sell them for full face value.

Always buy them for under face value from Costco or at websites like Raise.com, GiftCardGranny.com, and GiftCardRescue.com.

Many of the HDTV’s at Walmart are from lesser known brands and made of inferior components.

I actually had an employee confirm this to me last year and he added that some of the bigger name-brands also come with cheaper internal parts that are specifically made for Walmart.

Apparently very few people buy laptops from Walmart and most find better prices online or directly from the manufacturer.

The article suggests not being your new refrigerator from Walmart as they rarely have specials and sales events which include free delivery and take away of your old appliance.

This one is a head-scratcher for me as I’ve never seen large appliances for sale at a Walmart. Have you?

Agree with this one. I’ve never seen a better price at Walmart on batteries compared to Costco.

Also, when it comes to small batteries for your watch, or portable electronic device, always shop at Amazon as they have the best prices.

To see the complete list of smart and dumb buys at Walmart, check out the GoBankingRates article linked below:

Most often, you come across people who will either be pro Walmart or completely anti. Rare are those who would say that can get both good and bad deals at Walmart. The key to striking a good deal and avoiding a bad one at Walmart is the ability to spot the items that provide real savings. A few items that account for stellar deals here include furniture, Lego sets, organic food, coffee and tea. Furniture is available at great bargains too and can help you save a lot. However, products such as gift cards, home appliances, laptops, televisions and batteries will always have you paying more than you would at official showrooms.

You mention that you can get better deals at Cotsco, however, I live in Southern Louisiana and we do not have a Cotsco within 100 miles of where I live. While you may be able to get better deals, I would have to travel over 4 hours to reach the nearest one, while Wal-Mart is only 30 minutes away. There may be some good deals online, but if it’s something I need in a hurry – well. Remember not everyone lives near a big city and all of these stores are not readily available to everyone.