The Stores and Restaurants Known to Accept Expired Coupons

When it comes to couponing, there is nothing worse than pulling a coupon out of your purse, or finding it on your smartphone, only to realize it has expired. But all is not lost as some stores and restaurants will still accept expired coupons. Keep in mind that the stores listed below are under no obligation to accept your coupon and results may vary by location.

TIP: Always be polite, friendly, and never demand they accept the coupon and your chances of success rise substantially. With that said, here are the retailers known to help you out anyways if you present an expired coupon to them. 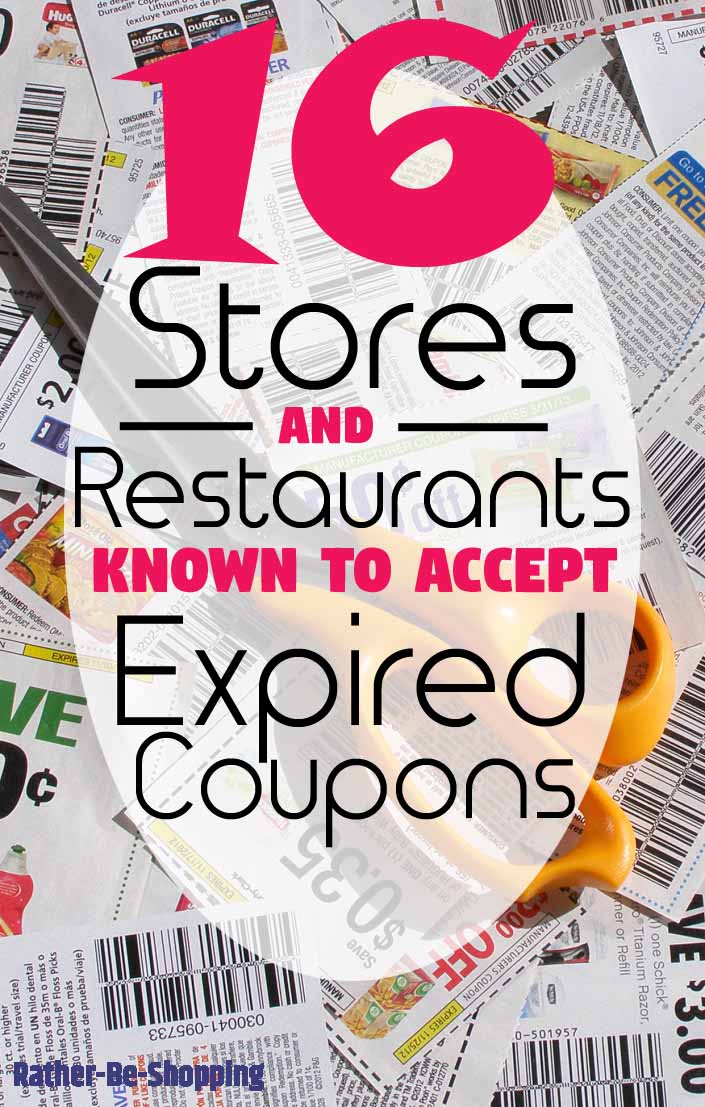 If you’re craving a Beef ‘N Cheddar on the cheap and can only find an expired coupon in your junk drawer, no worries as they’ll more than likely still accept it.

I actually found a TripAdvisor review of an Arby’s in Georgia that talked about re-using an expired Arby’s coupon.

From the review, “Accepting expired coupons AND letting me reuse the same coupon? Winning!” While every location might not be as lenient, it’s definitely worth a shot. Sign-up to get Arby’s coupons emailed to you.

Thanks to Dana for letting me know that Bath and Body Works will take an expired coupon up to 3 days beyond the expiration date.

Bed Bath and Beyond

The famous 20% off any 1 item coupon from Bed Bath & Beyond can be a real money-saver, especially on significant purchases.

But what happens if you can only find an expired coupon before your trip to the store?

Simple. Use that bad boy anyways as it’ll either be accepted or the cashier will pull out a “non-expired” coupon from behind the counter and scan it for you.

Like with any of these stores, be polite and friendly, and your chances of success rise significantly.

When it comes to expired coupons, you absolutely CAN have it your way at Burger King.

Apparently most BK employees don’t even look at the expiration dates and are happy to give you a coupon discount.

When ordering from the drive-thru, tell them upfront about the coupon before you place your order, but don’t mention it’s expired.

Often times they won’t even ask for the coupon when you get to the pick-up window.

From personal experience (I have 3 kids), the folks at Buy Buy Baby could seem to care less if a coupon has expired.

So always attempt to use, no matter the expiration date, when checking out.

If you feel uncomfortable trying to use the expired coupon, just find a non-expired Bed Bath & Beyond coupon and they’ll accept it. (Bethca didn’t know that?)

Thanks to Kristi for letting me know that Culver’s Restaurant also take expired coupons.

Wait, so they butter their buns and take expired coupons? I think I may have died and gone to heaven.

CVS changed their coupon policy back in 2013 and became a little more strict about not accepting expired coupons.

But…it’s not a hard and fast rule and many cashiers still have the ability to override the system and accept an expired coupon.

Key to success is to be polite and friendly when stating your case that they should accept the coupon.

My experience has been a success rate hovering around 50%. Your chances go way up if the coupon has only expired in the last few days.

See Also: All The 26 Retailers Who’ll Text You a Coupon (Like Immediately)

Just this past weekend I was buying a pair of Under Armour shoes from my local Dick’s and the only Dick’s Sporting Goods coupon I could find had expired the week before.

On a hunch, I went ahead and showed the cashier the coupon on my smartphone and she scanned it and told me that it had expired. I kinda played dumb and said, “Oh, bummer.”

She then said no worries and did an override on her computer and accepted the coupon.

I always get great customer service at Dick’s. Always try to use expired coupons and you’ll typically end up with the discount.

According to a comment from ET, Hallmark stores also accept expired coupons.

I did a quick Google search to verify this information and while I couldn’t find anything about coupons specifically I did find where they take expired Rewards Dollars.

As a matter of fact their website said, “Stores can accept expired rewards 45 days after the expiration date.”

While the official Harris Teeter coupon policy states that they will not accept expired coupons, I have it on good authority that they absolutely will if you try.

This includes manufacturer coupons, and even competitor coupons that have recently expired.

I recently tried to use a 20% off expired JCPenney coupon and the cashier told me I couldn’t use it, but she had one under the counter that she pulled out and scanned for me.

I thanked her and asked her if she would have let me use the coupon if I didn’t present the expired one, and she said probably not.

She said most cashiers are trained to give the customer a working coupon if they have an expired one.

Moral of the story: Always present the expired coupon and you’ll typically end up with a discount of some kind anyways.

Apparently the Kohl’s Cash can be REALLY expired too which is great to know. So if you stumble upon some old Kohl’s Cash in your purse or desk drawer, DO NOT throw it away as they’ll accept it anyways.

Update: Apparently your mileage will vary when trying to redeem expired Kohl’s cash. Some stores will take it, many won’t.

But if it has expired by only a day or two, you should definitely try and use it because it typically has a 48-hour grace period attached to it.

See Also: ‘Tis the Season to Save: 7 Ways to Save on Your Holiday Shopping

Last fall I was installing laminate flooring in my home and needed some tools to get the job done.

So off I went to Lowe’s with an expired in-store Lowe’s coupon in my pocket.

Granted the coupon expired only 2 days earlier, but my cashier immediately did an override to make the coupon good.

I asked if that was standard policy, and he said that most cashiers will override an expired coupon if it has expired within the last 7 days. Great to know.

An expired coupon at Michaels simply means you have the wrong coupon. Since they release new coupons every Sunday morning, which are valid through the following Saturday, you should always be able to shop with a Michaels coupon in hand.

Sometimes they’ll have a really good coupon for 25% off your entire purchase that only lasts a day or two.

If you have one these coupons that’s expired by a week or less, I suggest playing dumb and try to use it.

If it gets rejected, the cashier will very often have something very comparable behind the counter that he or she can scan for you.

This tip is from my wife who’s scored a great coupon several times doing this.

Thanks to current employee Geo, who let me know that you can indeed use expired Petco coupons well after the printed expiration date.

This works best for Petco’s own in-house coupons, but you should go ahead and try and use expired manufacturer coupons as well.

You stand a great chance of saving some money on an otherwise useless coupon.

I have it on good authority from a current employee that Petsmart will indeed take expired coupons.

The catch is that they must be Petsmart’s own coupons and not manufacturer coupons. She told me that they’ll actually take Petsmart coupons for up to 6 months beyond their expiration date.

Staples has been known in recent years to accept their own coupons, even if they’ve expired.

Will it work all the time at every location? No. But that doesn’t mean you shouldn’t try, as the one time you don’t, is the one time where you’ll probably leave money on the table.

While I couldn’t find any official evidence of them accepting expired Target coupons, I did find a YouTube video of a couponer having success using expired offers at their local Target.

Then a little more digging, and I discovered another video telling us the same thing. I’m guessing your mileage will vary by store, but it seems to definitely be worth a shot.

Walmart’s official policy is to not accept expired coupons. But because coupons these days are embedded with a high-tech barcode, often times they’ll contain an expiration grace period of several days or even up to a month.

Moral of the story: Always try to use expired coupons at Walmart as you stand a great chance of falling into this “grace period”.

I learned this from a lady I was checking out behind at Walmart, several of her coupons were expired but were still accepted by the computer when the cashier scanned them.

Happy expired couponing. A great last resort for expired coupons to to mail them overseas where they’ll be accepted at military commissaries.

DSW is the BEST!!

Just a crumb of information kinda on this subject~ If you shop at Target & forget your coupon/coupons you have a 3 day grace period to redeem them. I believe they must not be expired but never tried to redeem an expired one to customer service. Take your receipt and coupons in to customer service & receive CASH back!!! Must be done before 3 days (that’s set in stone). Hope this helps~

I don’t think Walmart does

I don’t try even try to use expired coupons anywhere bc where I’m from these cashier’s make a fool outa someone with an expired coupon. And I refuse to go to jail over a coupon.

That’s weird…where do you live?

So does Culver’s. They just put dates on them to track them.

Good to know, thanks Kristi.

does anyone know if BevMo takes expired coupons?

Arby’s does not accept expired coupons in Ravenna Ohio!