My love affair with the McDonald’s secret menu started when I was in college and the local Golden Arches offered 2 Big Macs for $2. Needless to say I indulged often and my waistline paid the ultimate price. The prices have gone up quite a bit since my college days, but there are still smart ways to save money at McDonald’s. There are also some interesting items on the Mickey D’s secret menu that I recently discovered. Some of which will actually help you save money on your next meal. Enjoy, and let me know in the comments if I missed any menu items and I’ll investigate. 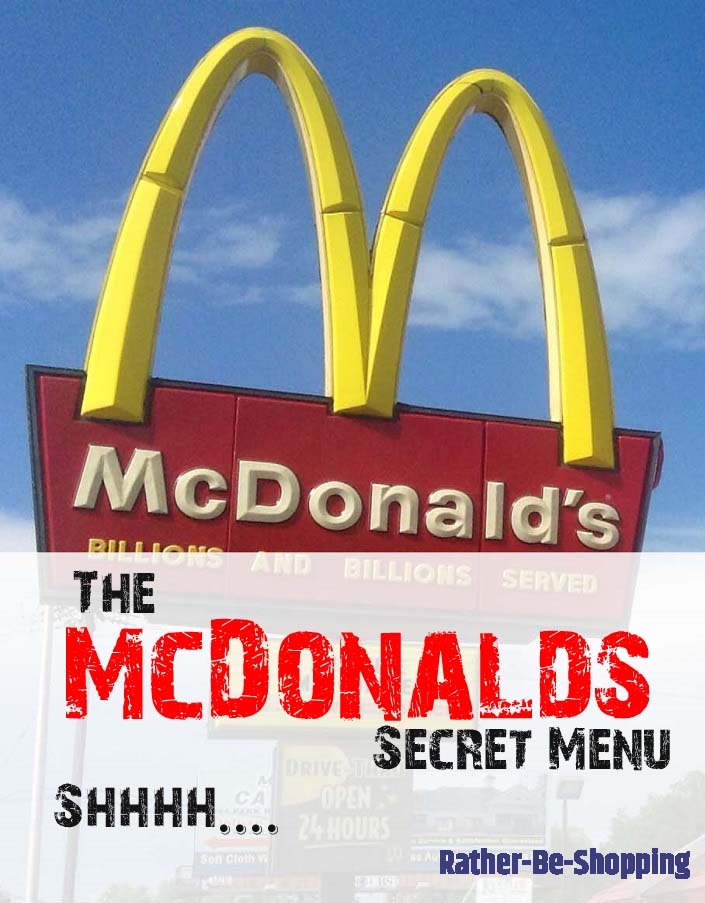 I figured we’d break down the McDonald’s secret menu by category, hope it helps and bon appétit. Keep in mind that some of these secret menu items are known by all McDonald’s employees and some are a bit more “off the radar” and may require some assembly on your own. Drum roll please…

All American Burger: This is basically a cheeseburger without the cheese, mustard, and onions. So, in case you’re keeping score, the All-American consists of a bun, beef patty, ketchup, and pickles.

Big Mac N Cheese: For the vegetarians out there, this is a BigMac without the cheese. Hmm, I think I’d just stay home and eat before I ordered this.

Big McChicken: This is a BigMac, but instead of 3 pieces of bread, you use 3 chicken patties. Yes, the chicken is like the bun, and you still have the 2 beef patties, cheese, lettuce, onions, and special sauce. What has the world come to?

Chicken Big Mac: This yummy treat has been available in Australia for quite some time. It’s basically a BigMac, but you substitute the 2 beef patties for 2 crispy chicken patties.

Chicken McGriddle: Order a McGriddle and substitute a fried chicken patty in place of the sausage or bacon. Yum.

Fried Egg Burger: Just add an egg round to any burger to get the trendy new fried egg on a burger taste.

See Also: I Taste Tested the McDonald’s Dollar Menu and Lived to Tell the Story

Grilled Cheese: When you want to go meatless or maybe your kid loves grilled cheese sandwiches. This is simply a bun with melted gooey cheese in the middle.

The Land, Sea, and Air Burger: This bad boy is created when you combine a BigMac, Filet O’Fish, and McChicken between a single bun. Wow, has anyone ever ordered this one successfully? I’m guessing you’ll need a fork and knife to eat it. You’ll probably have to order all 3 separately and create this behemoth on your own.

Mc10:35: Get to McDonald’s around 10:35 am, when breakfast and lunch is available and create the Mc10:35. Order an Egg McMuffin and a McDouble and take the patties and cheese from the McDouble and add it to the McMuffin. The Mc10:35 is born.

McGangBang: A very unfortunate name for a burger that combines a McDouble with a McChicken. To make it happen, you simply place the McChicken directly inside the McDouble and chow down.

McKinley Mac: This is a BigMac, but ask for two 1/4 pound patties instead of the little patties that typically come on the “Mac”. This burger magically turns into a meat lovers dream sandwich.

Monster Mac: Hungry? Forget about the BigMac. The Monster Mac consists of 8 beef patties, 3 buns, and a whole bunch of cheese, lettuce, onions, and special sauce.

Poor Man’s Big Mac (Money Saver): This is my favorite item on the McDonald’s secret menu. Simply order a McDouble with no pickles and ketchup. Replace them with onion, lettuce, and special sauce. Boom, you have a Big Mac for a fraction of the cost. Sure, no bread in the middle, but I always that was odd anyways.

2 Cheeseburger Meal: This use to be my go-to meal when I was driving and eating at the same time. Tasty, filling, and not messy. Apparently it’s not on the regular menu anymore, but you can still indeed order it.

Hash Browns McMuffin: Order any Egg McMuffin, or breakfast sandwich, and add an order of hash browns to the middle. Fried potato heaven is the outcome.

McChicken and Waffles: Fried chicken and waffles is all the rage these days. Get this by ordering a McGriddle, minus the eggs, and substitute chicken instead of sausage or bacon. It’s heaven in a bite, heck, even throw on a little syrup for some sweetness.

Animal Style Cheese Fries: Okay, this one’s a stretch, but if you love animal style fries from In-N-Out Burger, you can duplicate it at the Golden Arches. Start by ordering a Grilled Onion Cheddar Burger, fries, and Big Mac sauce. Then take the onion and cheese from the burger, add it to the fries, followed by the Big Mac sauce. Boom, go to town and your animal-style creation.

Big Mac Sauce Fries: Ask for some BigMac “special sauce” to dip your french fries in. Most locations will give you some for free if you politely ask.

McCheese Fries: Two ways to make this secret menu item happen. First, order extra cheese on your burger then transfer it to your fries. Or politely ask for a piece of cheese on top of your fries and let the heat of the fries do the melting.

No Salt: If you don’t want salt on your fries, just politely tell them. This is a great way to get fresh and hot fries too.

Apple Pie McFlurry: This is when they add their yummy apple pie straight to a McFlurry and blend it. It’s a delicious blend, trust me.

Caramel Apple Sundae: This secret menu item is the hot caramel sundae with nuts along with some chunks of fresh apple. If they won’t do it for you, just order the apple wedges separately and do it yourself.

Cinnamon Melt A la Mode: Order a batch of Cinnamon Melts and a small vanilla soft-serve with a cone. Then throw the soft serve directly on top of the Cinnamon melts and let the party in your mouth begin.

McLeprechaun Shake: To celebrate St. Patrick’s Day, McDonald’s rolls out the minty green Shamrock shake every March. Ask for a McLeprechaun shake in March, and they’ll blend a Shamrock shake with a chocolate shake. The result is pure heaven in a cup.

McCrepe: The McCrepe is made with a pancake wrapped around a yogurt parfait and sounds really yummy.

McCoffee Float: Just ask for some vanilla soft serve in your hot coffee. Apparently, many McDonald’s locations around the world already have this item on the regular menu.

Neapolitan Shake: Ask for it by name and you’ll get a milkshake with vanilla, chocolate, and strawberry. They won’t be swirled together, but will instead be layered, but you can ask for whatever layering you want.

Orange Creamsicle: Order the vanilla soft-serve in a cup and add a little Orange Hi-C for a creamy citrus treat.

Root Beer Float: Similar to the In-N-Out secret menu, you can ask for a scoop of vanilla ice cream to be added to your root beer or Coke. Or any soda for that matter.

Strawberry Egg Nog Shake: When December rolls around, ask for a blend of the eggnog shake and strawberry shake and you’ll never go back…to, um, something else. Oh, be sure to get it topped off with whipped cream too.

Ask the Reader: Have you ever ordered anything from the secret menu at Mickey D’s? If so, what did you order and was it tasty?

Hi! McD’s doesn’t have the Orange Hi-C anymore. Instead they changed it to Orange Fanta. I almost cried when they told me.

These aren’t “secret menu” items. These are just mix’n match made up concoctions. Though some do sound delicious none of them are universally known by workers from various locations

Some of these names contradict the description I feel like. I also feel like surf turf and sky burger is a better name for the land sea and air burger. I also thought mcdonald’s served bfast all day unless they changed it within the last year. I don’t understand the 2 cheeseburger meal nor the portuguese sausage mcmuffin. The secret desert menu makes me hate my new lactose intolerance even more. And I loved your burger king secret menu article. Thank you!

TIL when trying to find your article and looking at other articles that you can also make an ice cream sandwich with two cookies and soft-serve.