I always like to “Eat Fresh” at Subway and it’s usually a nice substitute to a greasy burger. But sometimes their subs get a little boring and bland and it would be nice to be able to spice things up a little bit. Enter the Subway secret menu. Little-known subs and sandwiches that’ll spark your imagination, not to mention your taste buds. Here’s what we know so far, and I hope to add new Subway secret menu items to my list as I discover them. 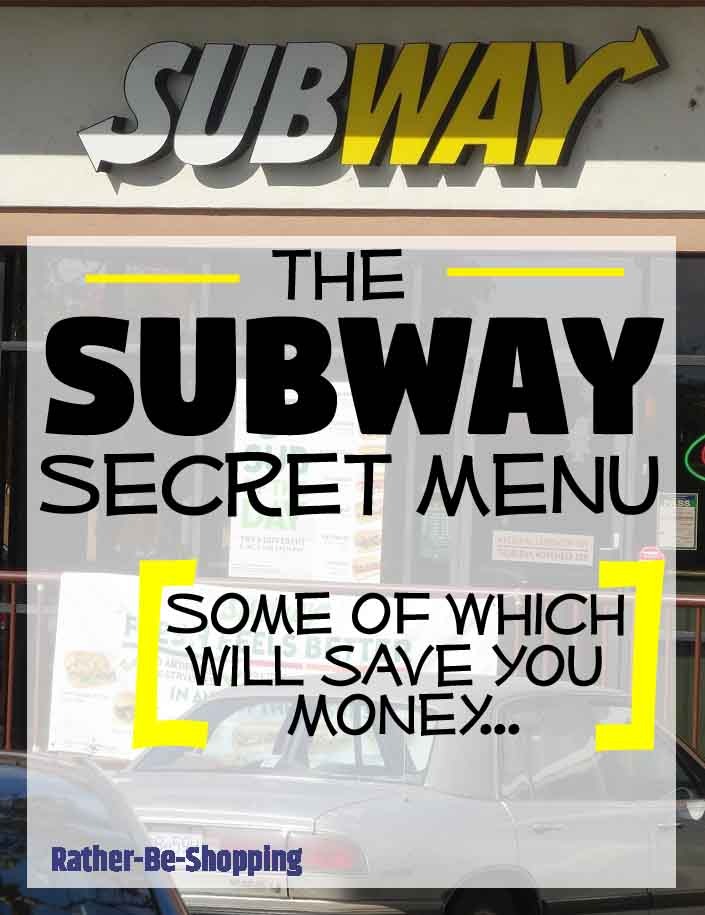 Back in the day, Subway artists would slice their bread a little differently than they do now. Instead of slicing the bread in half, they would cut a v-shaped trench on the top. The result? A sub that was easier to load with meat and veggies and kept them from falling off.

Also, I know for a fact the old cut would hold more veggies than they do now and it would result in a bigger meal for those with a BIG appetite. Order the v-cut and test out my theory for yourself.

Update: According to someone who left a comment, who use to work at Subway, they called this the “u-gouge” and she said it doesn’t hold nearly as much stuff.

Order your sub with “Wing Effect” and the artist will leave your meat of choice hanging over the side of the bread. This is done by not folding the meat onto itself, but instead laying it flat on the bread.

It allows you to nibble on the meat before taking a big bite out of your sub. Hey, whatever floats your boat, I ain’t judging.

The Pizza sub is a long time favorite on the Subway secret menu.

Order it and you’ll get a sub with red tomato sauce, pepperoni, cheese, and your choice of bread. Don’t forget to get it toasted, add some parmesan, and you’ll end up with a delicious pizza on a sandwich.

Order this and you’ll get a yummy concoction with your choice of bread along with chicken breast, ham and cheese.

Make sure you get it toasted for the full cordon bleu experience.

According to this Reddit thread, you can order a secret sub that’ll feed an army.

Here’s how the conversation with the sandwich artist went down:

Truck Driver: “Son, are you ready to make the biggest baddest sub of your life?”

Truck Driver: “Give me a footlong B.M.T. (Biggier. Meatier. Tastier. If you ever wondered). I want 8 double meats, 8 double cheese, 9 layers of bacon, more bread and every vegetable. Two forks.”

Subway Employee: “So you want more bread added in between levels of meat?”

Truck Driver: “Yes. If it looks like it needs bread, add more.”

Total cost for this bad buy, $86. And apparently it was so big, it didn’t come close to fitting in the bag. I would’ve enjoyed watching this guy try to eat it, must have been a sight.

This beauty sounds delicious and will take your breakfast to the next level. Order it off the Subway secret menu and you’ll get flatbread loaded with egg whites, steak, guacamole, spinach, red onions, sliced tomatoes and topped with yummy Chipotle sauce.

I’m all over this one like “white on rice” the next I stop at Subway for breakfast.

This can be ordered any time of day and is loaded with protein. It’s made on soft flatbread and comes with egg whites, red onion, banana pepper, spinach, black olives and topped with a tangy Italian dressing. This sandwich makes for a nice alternative to the boring subs found on their regular menu.

Back in 2010, Subway took this beauty of their regular menu, but never fear, most employees still know how to make it and it’s been secret menu fixture for years.

If they don’t know how, just ask for a sub with roasted chicken, marinara sauce, and Parmesan cheese. I recommend getting it toasted so you get all of the gooey goodness of the melted cheese and toasty bread.

See Also: The Chick-Fil-A Secret Menu is a Tasty Way to Order Your Next Meal

This Subway secret menu item is a favorite among many Subway loyalists. Order it as a footlong and you’ll get a sub with 3 big scoops of steak and twice the cheese as normal.

Don’t forget to get it toasted with onions and peppers to make it a true Philly sub.

This bad boy is made with ham, turkey, roast beef, salami and pepperoni piled high. Cost? Apparently a foot long comes in at about $13. Maybe split one with a friend unless you have a HUGE appetite.

Great FRUGAL tip from Jen, “To make The Feast a cheaper sub, ask for a club (roast beef, turkey, ham), then ask to double the meat using the ingredients for a spicy Italian (salami and pepperoni). Then you get all of the meats without having to pay individually.”

See Also: 7 Brilliant Ways to Save Money at Subway (and Get More Chow!)

Also known as “The Carnivore” by many sub enthusiasts, this Subway secret menu sandwich piles on the meat. What meat you ask? How about 4 scoops of steak, 6 slices of bacon, and a handful of pepperoni. Throw on all your favorite fixings and you have a sub made for a hungry lumberjack.

It’s a toasted sandwich that comes with egg, turkey, ham, bacon and your choice of cheese.

This one is buried deep on the secremt menu I’m guessing.

According to “Subway Guy” in the comments section, it’s da bomb.

Also from the “Subway Guy”, the Albuquerque Turkey is made with turkey, add bacon, add green chili, toast it, then add avocado.

OK, I’m not gonna lie, that sounds REALLY good and love the tex-mex feel of it.

This yummy concoction (that helps me hang on) is flatbread pizza made with BBQ sauce instead of marinara sauce, chopped chicken strips, bacon, onions and bell peppers then topped with mozzarella cheese.

Ask the Reader: Which one of these Subway secret menu items sparked your interest? Do you have any “secret” subs I should add to my list? Let me know in the comments. Thanks.

So your list is very cool but super incorrect.. I have worked for subway for a long time and if you order a B.M.T your not going to get anything like what the truck driver ordered. The bmt did once stand for the bigger meater tastier but that was still just. Pepperoni, salami and ham. This nickname became irrelevant once they introduced the feast. Also the proper name for the old cut is the u-gouge and it in fact does not old any where near the same amount that our current hinge cuts do.

I’ve been with Subway for 7 years so I can agree that the list was inaccurate. The Sunrise melt is on the menu it is not a secret menu item. BMT is 6 pepperoni, 6 salami and 4 ham.

This is no longer on your menu and some of the Subway’s don’t want to make it. Which is stupid as it is one of the best sandwiches they had.

not sure why everyones bragging about how long theyve worked at subway hahahahhaha…….

I ALWAYS get the Chicken Pizziola w/ mozzarella – Best sandwich ever.

I just found this list because I witnessed someone order the BMT. It was amazing to see with my own eyes but I’m to broke to ever buy

I’m jealous. Not of your money situation, but that you got to watch a dude down that thing.

I would also add
1. The Breakfast BMT which is an (for a foot long) 2 eggs 6 pepperoni 6 salami and 4 ham.
2. The Albuquerque Turkey which is a turkey add bacon, green chili then toasted and add avocado.
3. Chicken Bacon BBQ Flatizza (Think Pappa Something’s) which is a Flatizza (flatbread pizza) made with BBQ sauce instead of marinara sauce, chopped chicken strips, bacon, onions and bell peppers then topped with mozzarella cheese.

My personal favorite is the subway melt. Turkey, ham, bacon.

Then provolone, chedder, american, pepper Jack, Swiss, shredded Monterey Jack, and mozzarella. In order so that it’s a different cheese slice every time going across the sandwich.

And make it a double. Now you’re thinking that sub never close and you’re probably right so take two breads and do the hinge cut like normal. Place both breads open face in the toaster and toast the car out of them. This will help with stability. Apply half of the above to one bread across the top and bottom then get a flat bread toast it up and put it on top of the applied meat. (you can add sauce at this time if you want the apply flat bread).

Next add the rest of the meat, sauce, veggies, etc. Lastly put the second bread you got on top to top it off. Then before you begin to eat take out a life insurance policy. Jk. Never made this sandwich but maybe someone will try one day.

Egg plant parm: veggie patty with tomatoes and marinara sauce toasted with mozz and parm add what veggies u like and enjoy 🙂

To make The Feast a cheaper sub, ask for a club (roast beef, turkey, ham), then ask to double the meat using the ingredients for a spicy italian (salami and pepperoni). Then you get all of the meats without having to pay individually. It may be hard to find a sandwich artist who understands what you’re asking for tho, so communicate it carefully.

Hey I guess I’m not the only one to invent the BBQ chicken flatizza. I also like to make breakfast biscuit sandwiches with gravy on top. And supreme soup bowls: crumbled biscuit, ladle of soup and toppings-cheese, bacon, onion, green pepper, etc.

How can a restaurant that forces you to specify every single ingredient even have a “secret menu”? I would love to be able to just order a sandwich and pay for it without having to provide the recipe when I order…