The Worst Things to Buy From Costco and Sam’s Club

There’s no doubt that warehouse clubs like Costco and Sam’s Club offer great deals for savvy shoppers. Savings that can easily pay for the annual fee if you shop smart. But as with any retail store, there are going to be items that just don’t cut the mustard in terms of the amount of money you can save. Here are the bad buys at Sam’s and Costco that should be bought elsewhere.

Let me know if you disagree or agree in the comments and hopefully we can make this article a great resource for warehouse club shoppers everywhere. 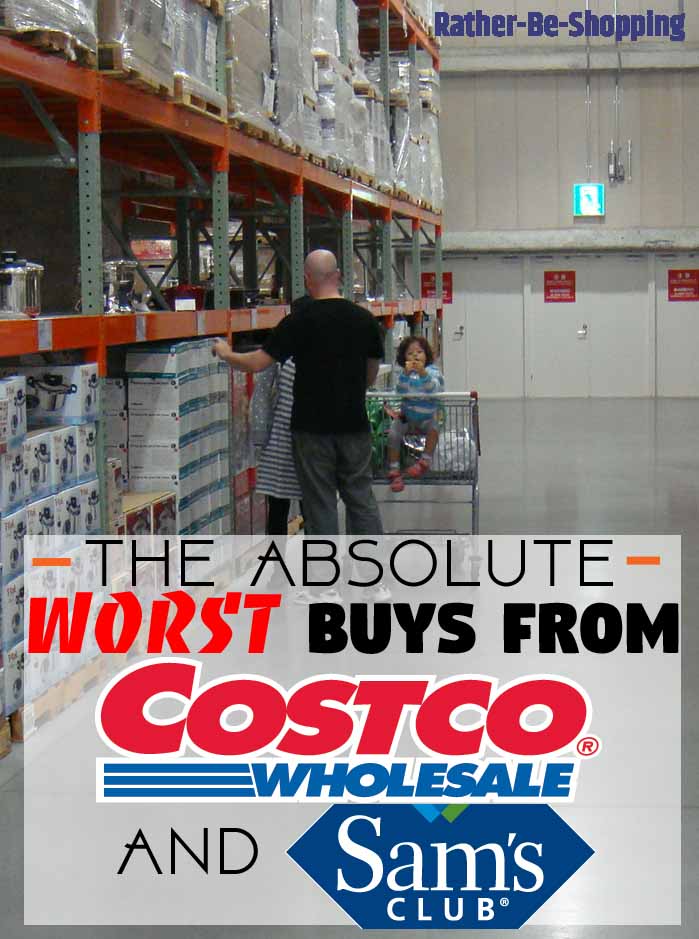 The Bad Buys at Warehouse Clubs:

From Kiplinger, here are a few of my favorites, followed by some commentary from yours truly:

The Kiplinger article states you can typically find books and DVDs 15% cheaper online. Yeah…maybe. Costco prices are pretty darn good in my opinion, especially on box sets of DVDs and “new to paperback” books.

But you can definitely buy books cheaper online if they are used, check out sites like ThriftBooks.com and AbeBooks to score some awesome used deals.

You can typically find better deals at grocery stores, especially when they put their store-branded cans on sale. Also, since they last for years in your cabinet, stock up when they go on sale and save big.

Because Costco and Sam’s don’t generally accept coupons, you can get a better deal on cereal when it goes on sale at your local grocery store. This is especially true when you can combine a manufacturers coupon with a grocery store-wide sale.

Because the shelf-life is relatively short, buying large containers of olive and vegetable oil is typically a bad buy at Costco and Sam’s Club. Instead, buy when they go on sale at grocery stores in smaller containers.

Apparently the prices on produce at warehouse clubs is static, whereas grocery stores fluctuate their prices when fruits and veggies are in-season.

So over the course of a year, you can save more money by buying from your local grocer as prices drop a lot when produce is in-season.

As a family who buys all of our toilet paper, paper towels, and napkins from Costco, this one surprised me.

Kiplinger suggests saving more money by shopping “for paper products during the first and third weeks of the month, when supermarkets typically put them on sale.” Might have to give this one a try.

The article suggests buying flip-flops at the dollar store rather than at Costco.

Really? I don’t know, maybe I’m just really hard on my sandals, but the last pair of flip-flops I bought from the dollar store blew out within a week. I hate buying pants and shorts from Costco as I can’t try them on.

I have twice bought a pair of Levi’s and Calvin Klein khakis and got them home only to find out that my typically size was way too small.

The article says you can typically find better deals online on new TV’s and laptop computers.

Kinda disagree with this one as Costco is very competitive and often beats the likes of Amazon and BestBuy.com in price, especially on HDTV models in the 42″ to 65″ range.

Ask the Reader: Do you agree or disagree with these bad buys at Costco and Sam’s? How do you score the best deals at warehouse clubs?

Check out the article below to see all of the worst warehouse club buys:

I checked out the original article because I buy some of these items.
Canned goods refer to the large cans – I buy normal-sized 2-3 serving size cans at Costco unless on sale at the grocery (the Kirkland canned corn is great!).
Garlic Olive Oil – I buy liter bottles at Costco because it’s the only place this particular company sells it and the price is so good.
Produce – Hmmm, I almost always find better prices on produce at Costco and I live in CA.
Paper products – Costco often has coupons or sales on this which make it comparable to grocery stores.
Clothes – I’ve bought coats, sweats, under garments, pj’s, socks, jeans and shoes at Costco. Yes, of course the materials might be a little less quality than full price (just like at outlets), but I have never had to return anything due to lack of quality. I’m not sure how one compares dollar flip-flops to $10 flip-flops – sounds more like judgement rather than value call. (And yes, it is a pain to take the pants home to try them on, but they do take them back easily. You can also have clothes shipped to your home and then return them on your next trip.)
I used to work for a large winery that made a special ‘Costco blend’ of one of its best sellers, so technically the wine was not exactly the same as that sold elsewhere. And yes, it was made of less expensive wines that went into the blend. It was how they justified the lower pricing.

Thanks for the comment Carol. I’ve never seen coupons (or sales for that matter) on paper products at Costco, do they come in the small monthly coupon booklet you get via snail mail?

I sort of mis-spoke. They’re not coupons, but ‘instant savings’ and yes they’re in the little book and online. No need to clip – they are automatically applied at the register, but it’s good to pay attention to them when selecting what to buy. I think Walmart comes out cheaper for name-brand paper products, but I buy a lot of the Kirkland brand.

We buy paper products (napkins, paper towel and toilet tissue) from Costco. It’s true that we can sometimes find better deals, but the problem that we ran into is that the quality was often not there, where Kirkland brand of all three products is very high quality, in our opinion. Yes, we might pay $1.25 per roll of paper towel versus $0.75 on sale, but we’d often find that we were using a lot more of the cheaper stuff because it wasn’t as good. There have been times where the deals were just too good to pass up, but for the most part, consistency wins out for us.

So true. I feel that way about a lot of the Kirkland products.

Don’t forget to add in the cash back to your Costco savings. We normally receive between $200.00 and $300.00 on our AmEx membership card, plus the 2% for executive rebate.

Yes! Cash back is nothing to sneeze at. And the AmEx part is nice, until they stop allowing AmEx at least. We heard today that’s been pushed back to March.

I find that cereal is a GREAT buy at Costco. They key to saving at Costco is to KNOW what your local grocery charges regularly and on sale and then you can compare unit pricing.

Don’t impulse buy at Costco. Go in knowing what your local grocery charges and then you can make an informed buying decision.

My beef with cereal (e.g. Life) at Costco is that the packages are so large, that the content at the bottom of the package(s) is often crushed into crumbs. Sure I can recycle them but that’s not the point. Walmart is our go-to for cereal.

We stopped buying apples at Costco. The apples are so large, it often works out to a dollar per apple. Here in Manhattan, between street vendors and Chinatown, you can often score Fujis for .50 cents per apple or less. If there is any trade-off in quality, it is minimal.

Is there a discount for membership if you get Social Security benefits and/or if you are 60 years old?