“We have the meats!” Oh wait, that’s Arby’s not Costco. But I’m here to tell ya that Costco has the meats too. But as you can tell from the picture below, Costco meats aren’t always cheap but they are definitely high quality. But if you know what you’re doing you can save money at Costco and even pay less than some grocery stores and butcher shops. Let’s break it all down so you can save on your next trip to the warehouse club… 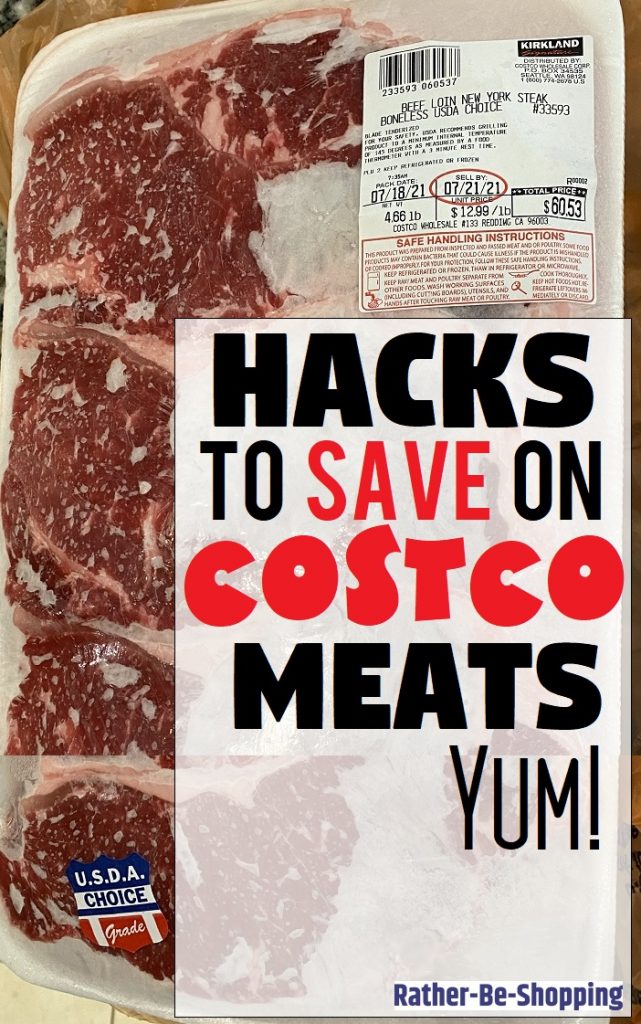 The beef, chicken, and fish sold at Costco does tend to be of higher quality then what you’ll find at many of your local grocery stores.

This is especially true when you look at the Prime cuts that Costco sells.

Their Prime section in general tends to have excellent marbling and delicious flavor.

Where Does Kirkland Meat Come From?

It really depends on the cut of meat and where it is sourced.

While Costco tries to buy from U.S. suppliers, often times they are forced to buy their organic beef from Australia and Canada.

With that said, they get most of their pork from JBS Swift USA and their chicken from farms that they actually own.

See Also: 7 Genius Costco Bakery Hacks That Will Save You Money and Time

What Meats are Sold at Costco?

Costco sells all the usual suspects:

You’ll even find lamb and ground bison at most Costco locations.

Costco tends to run on the more expensive side.

This is especially true when compared to supermarket specials and coupons that often undercut Costco pricing significantly.

But when comparing the Costco price to your local butcher shop, Costco will usually win.

5 Costco “Meat Hacks” That Will Help You Save

I’ve talked about this hack before.

Many Costco locations sell bulk meat in cryovac bags and these bags come at a steep discount.

Could be a case of rib eyes, case of tri-tips, case of crab legs, etc.

BUT…according to one employee, you’ll get “3 or so times the meat for the same price.”

And the best part is that the cryovac bags let you freeze the meat for a REALLY long time.

You usually can’t find these bags on the sales floor so be sure to ask a meat department employee about it and they’ll happily let you know your options.

According to a Costco meat cutter that I talked recently, they often receive large shipments of a particular cut that they know they CANNOT sell by the sell-by date.

So he said to always ask about these “overbuys” and you can often get a really sweet deal.

Plus farmed salmon is often grown in poor conditions, unless it’s from Norway where their farming standards are far superior compared to other countries.

But often times wild salmon is actually CHEAPER than farmed at Costco.

I recently saw wild Sockeye Salmon priced at $7.99 pound and the farmed variety was $9.99.

Moral of the story, always look around at Costco to see what salmon they have stocked as they often DON’T put the wild salmon next to the farmed.

I was recently at my local Costco and someone near me asked the meat cutter if they could cut a flank steak into 1 inch cubes for them and they said “Of course!”.

Turns out shoppers do this all the time and will ask for some steaks cut in half (length-wise) or even pork chops cut extra thin.

Might not save you money but will surely save you time if your recipe calls for a certain type of cut.

5. Ask For a Chub of Ground Beef

This tip comes from the folks at The Family Handyman and it involves buying ground beef in a long tube called a “Chub”.

Ask for it by name in the Costco deli section and they’ll hook you up.

Apparently the clear plastic chub packaging is much cheaper and many Costco locations will pass the savings along to you and give you a small discount.

Mileage will vary by location but it’s worth a try if you’re buying a lot of ground beef for a big neighborhood BBQ or something.

Ask the Reader: Do you buy your meat from Costco? What tips do you have to share, let me know.

We recently tried a tube of Costco hamburger for the first time and were really pleased. It’s marked 91% fat free, but tastes leaner than that and is a really fine grind with no mystery bits. Had a really good grilled flavor. We often get their chicken breasts because they’re packaged in two’s and we can throw them in the freezer. The thighs we have to repackage for freezing, but they’re worth it for their size – much larger than the usual store. As far as salmon goes, I think it just depends on the type of salmon. You might find this site helpful: https://www.seafoodwatch.org/

I asked for some lamb chops to be cut for me at Costco. Butcher looked at me like I had 4 heads.