Which Store is Cheaper: Walmart or Amazon.com?

Walmart.com vs. Amazon.com, who has the better prices? It’s time to settle this once and for all.

These days everyone raves about Amazon.com and how it makes online shopping so easy.  But is the ease and convenience clouding your judgement? I’m a guy who has no problem sacrificing a little convenience for a better price.

Darn near every time actually. I mean seriously, it’s not like the Walmart website is some relic tucked away in the technology display at the Smithsonian museum. Or is it? More on that later.

So I figured it was time to lace up the gloves and throw Amazon and Walmart into the ring and figure out which retailer is cheaper.

The rules are simple.

I took 21 random products and priced them at both websites and tallied up the total price to find our winner. While this was very unscientific, the results were very interesting and can definitely help you make better buying decisions moving forward. 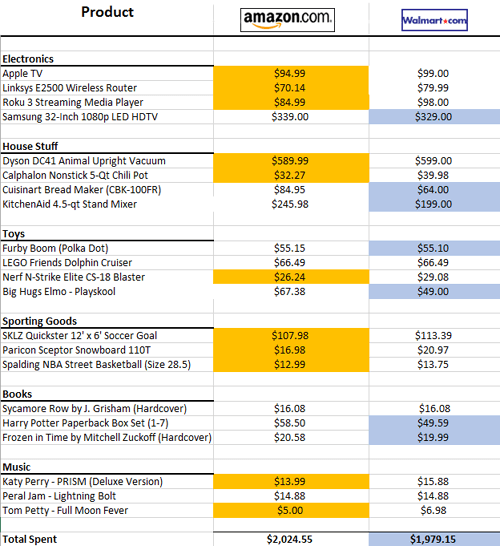 The overall winner by $45.40 was Walmart.com. Amazon actually won more battles with 11, but Walmart won the overall war. In the end, the overall dollar amount was very close and what I learned was very interesting and worth sharing.

Walmart had consistently better prices on televisions than Amazon.com. But Amazon definitely had a better selection. The Roku 3 streaming media player was a surprise in terms of price as Amazon beat Walmart by $13.

The biggest takeaway is that when shopping for electronics other than TV’s, Amazon tended to have better prices.

Clearly, this is the category that allowed Walmart to win this smackdown. I was really surprised to find that Walmart sold the KitchenAid Stand Mixer for $45 less than Amazon.

At first I thought it may be an inferior model but after some investigative work it turned out to be the same product.

Then the Cuisinart bread maker for $20 less was a bit surprising. Walmart must buy both products in incredible volume and make the manufacturer sell it for substantially less. This is a ploy that Walmart has been doing for years.

This battle was fairly even with Walmart winning in the end thanks to the deal on the popular Christmas toy, Big Hugs Elmo.

Walmart is notorious for trying to predict what the hot toys for Christmas are going to be and pricing them low enough to entice shoppers into the store.

They know that once they get consumers in the toy aisle they’re probably going to buy a bunch of other stuff at full price.

So if your child asks for a popular, and thus hard-to-find, toy this Christmas be sure to check Walmart.com first.

With three kids playing youth sports right now, this one was not a shocker to me. I have been finding good deals on sporting goods from Amazon for several years now.

Amazon actually won all three price battles and I believe that if I had picked 100 products Amazon would have won 90% of them.

The selection at Amazon is also very good and I have no problem saying that it compares to Dick’s Sporting Goods.com.

Books: Call it a Tie

The one was pretty even. If you’re buying new hardcover books, especially best-sellers, the prices are almost identical between Amazon and Walmart.

If you are buying box sets like the complete Harry Potter set of 7 then Walmart consistently offers the better price.

But if you are looking for the best selection, Amazon.com is the clear winner with over 12 million books for sale. Yep, you read that correctly, 12,000,000 titles.

While the dollar amounts were fairly close, Amazon won 2 of the battles and the other was a tie. This one actually kind of surprised me as I thought for sure the new Katy Perry album would be cheaper at Walmart.

I figured they could buy 10 zillion of them and pass the savings along to the shopper.

Not the case, at least with that one example. Older CD’s were consistently cheaper at Amazon.com as they have a huge online selection of titles that sell for a paltry $5.

Ask the Reader: Where would you rather shop – Amazon.com or Walmart.com? How much of your decision is influenced by price and how much is influenced by ease and convenience? As always, I look forward to your comments.

I’ve only ordered one thing from Walmart online. An area rug. The experience wasn’t bad, But I like Amazon. It’s quick, the recommended products are spot on and the return process is simple. In favor of Walmart however, I had to return the area rug because it was the wrong shade of green. It was convenient to take back to the store for a refund. Shipping it back would’ve been a nightmare. And expensive.

That is a great point about Walmart returns. So easy and cheap to just bring it back to the store. I’ve only had to make one return to Amazon and it was pretty easy buy definitely took a phone call and some time to reseal the package and drop off at a UPS store.

I heard Walmart is JUST now embracing the whole online shopping experience. Until recently they really didn’t focus on it at all. They have a big leg up over Amazon with their physical stores, in my opinion, if they can recruit some smart engineers who can make the website not suck. I have ordered on it a handful of times and it usually is pretty painful.

So true DC. If they can find the right people to make their site at the very least, easy and usable, they can really increase sales especially since they already have their distribution system in place.

Brick and mortar stores with their extra cost (electricity, employees, theft, insurance, etc…etc…) have a huge anchor tied to them that will pull them under in the future. Amazon will win and be the king.

Stefanie @ The Broke and Beautiful Life

I’ve never shopped walmart online. We don’t have any stores in NYC so I’ve always resorted to amazon for my shopping. The prices are better than any of the local bodegas, even better than the kmart down the street.

Kyle
Reply to  Stefanie @ The Broke and Beautiful Life

Hey Stefanie! In terms of price and selection, Amazon never ceases to amaze me. On a side note, there are still Kmart stores around?

If I am at walmart and find a product I might be able to find on Amazon cheaper I just use the Amazon app and scan it and it will tell me the price of the item on Amazon. It comes in handy quite often.

Absolutely, great tip Tanya! I like to use the RedLaser app for that because in addition to Amazon, it gives me the price at many popular online and brick & mortar stores in my area.

One thing not addressed is taxes. In some states, Amazon doesn’t collect sales tax, but I assume Walmart collects sales tax in almost, if not every state.

Since there wasn’t a big difference to begin with, this might tip the scale in Amazon’s favor a little bit more.

Great point Daniel. I live in California and Amazon.com now collects sales tax from me. If you live in one of these states you’ll have to pay sales tax when shopping with Amazon.com:

“Apparently the Walmart site was designed by the same folks currently working on HealthCare.gov” Too funny! It’s true though…they need to do some work on their site. There are no Walmarts in NYC, but I have one near where I work in Long Island. To get around the shipping costs…I do the ship to store option. Walmart stores are kind of depressing looking…at least the one I go to, but if it has a better price…I’m there!

Hi Kyle…I already confessed that I don’t shop at WALMART ever but I do shop at Amazon (and see a couple of books too) so I’m a little impartial. I would love to see a comparison of Walmart and Costco–not only on price and intangibles, but also on it’s social conscience. I appreciate that costco offers health insurance and pays a good raise….even though it’s a big box store they employees seem pretty happy. Let me know if you do a post on it! ~Kathy

I don’t know if I am seeing this correctly but to ME it’s Amazon that has better prices I mean look at it math is not correct as in first section EVERY item is cheaper for amazon yet you have Walmart total cheaper???