Get Social on Twitter and Save Money with These 10 Companies

It’s kinda funny how social media works sometimes. Not only is it a great way to network and connect with people, but the ability to use it as a money-saving tool seems to be growing daily.

The reason for this post all started about a week ago when I was asked by Cameron Huddleston from Kiplinger.com if I knew of any solid ways to use Twitter as a tool to save money. Thanks to a killer post by my buddy J.Money at Budgets Are Sexy.com talking about saving serious cash on his cell phone bill, and an ensuing interaction with Verizon via Twitter, the timing couldn’t have been better to help Cameron with her article. Here is how the whole dealio went down and 10 companies whose Twitter feeds will spark some money saving mojo. 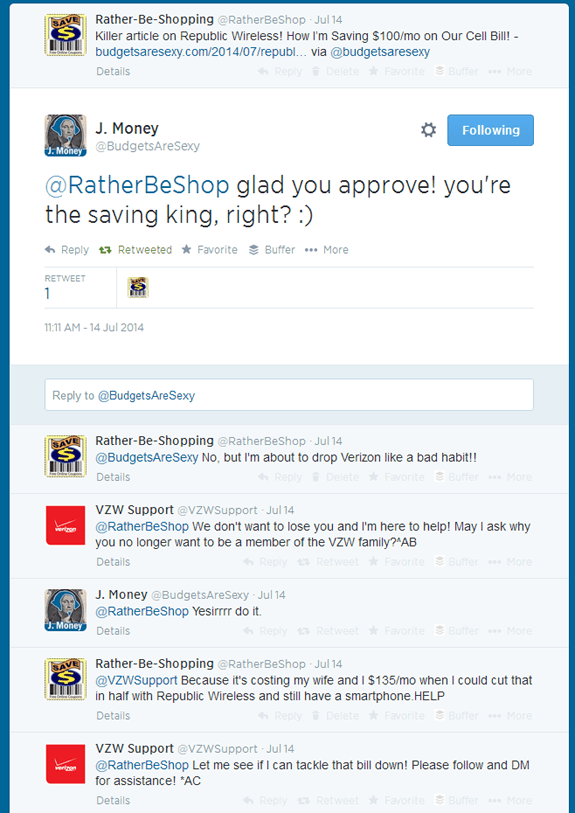 More and more companies are hiring what they term “social media mangers” to deal with issues that customers are voicing on Twitter, Facebook, and Instagram. They try to tactfully handle customer complaints and shout the praises they receive from the tallest mountain top they can find.

The bottom-line is that they try to become the face and voice behind the company. Smart move for sure.

So when a Verizon social media employee saw my tweet saying that I was fed up with them and ready to drop them like a sack of potatoes, they immediately reached out to me on Twitter and offered to help me get my bill lowered.

As a dude who loves to negotiate my bills and refuses to pay full-price for anything, it was indeed a light bulb moment.

Use Twitter to Save Money (and Time) With These 10 BIG Companies:

TIP: Make sure to follow the company on Twitter before you start a dialogue with them. You need to be following them in order to have a DM or “Direct Message” conversation which is typically how they’ll want to communicate with you on Twitter.

Ask the Reader: Have you ever used social media to interact with a company? If so, was it to voice a complaint or dole out some much needed praise? Did anything come of it? As always, I look forward to reading your comments below.

Hah! That’s pretty cool… Good/smart of Verizon to reach out like that – they’re doing it right 🙂

Agreed! Wish they did some other stuff right as well…but won’t go there right now/

Yes, checking in at Foursquare gets the attention of many including Walmart and Food Lion where they try to assist during your shopping trip.

Great advice. I’ll certainly be putting it to good use.

I always tag companies on Twitter when I write about them – good or bad. I actually just got a bunch of free ice cream coupons from JC Pie Pops for mentioning them in passing in a blog post and being really irritated they hadn’t started showing up on the shelves in NYC yet.

That’s pretty cool that you got a discount. I’ve tried to make sure my cable bill is low by periodically calling in and getting it lowered. It seems like Comcast has become less and less friendly with this option though.
I really wish that companies would just focus on providing good products and services at a fair price instead of offering these one-off magnanimous gestures.